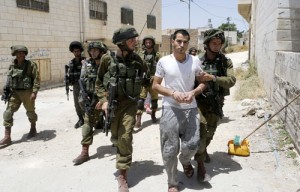 In the West Bank, a Palestinian civilian was wounded in al-Jalazonerefugee camp, north of Ramallah. Israeli forces conducted 57 incursions into Palestinian communities in the West Bank and 4 limited ones in the Gaza Strip, abducting 99 civilians, including 19 children and a woman

In the context of Israeli forces using force against peaceful protests, a 19-year-old male was hit with a bullet to the head while participating in a protest at the southern entrance to al-Jalazonerefugee camp, north of Ramallah. He was then taken to Palestine Medical Compound in the city for medical treatment.

Dozens of temporary checkpoints were established in the West Bank and others were re-established to obstruct the movement of Palestinian civilians.

In the Gaza Strip, in the context of targeting Palestinian fishermen in the Gaza Strip Sea, on 31 May 2016, Israeli forces stationed in the sea off Gaza Valley shore, west of the central Gaza Strip, opened fire at Palestinian fishing boats. They chased 2 boats sailing within 5 nautical miles and manned by 5 fishermen all from al-Shati’ refugee camp, west of Gaza City. The Israeli navy officers abducted the 5 fishermen, confiscated the 2 boats and transported them to Ashdod seaport. After the fishermen were released in the evening, it was found out that 2 of them were already wounded by Israeli gunfire.

On 31 May 2016, Israeli gunboats stationed in the seas off al-Waha shore, northwest of Beit Lahia, north of the Gaza Strip, opened fire at Palestinian fishing boats, but casualties were reported.

Concerning fire opened in the border area, on 31 May 2016, Israeli forces stationed in watchtowers established behind the border fence between the Gaza Strip and Israel opened fire sporadically at the border area, southeast of al-Zaitoun neighbourhood, southeast of Gaza City. No casualties were reported but the farmers fled fearing for their lives.

Moving to airstrikes, on 26 June 2016, Israeli warplanes raided a military training site for a Palestinian armed group, west of al-Nusairat refugee camp, in the central Gaza Strip. As a result, the site sustained material damage, but no casualties were reported.

On 31 May 2016, Israeli forces moved about 150 meters into the east of Beit Hanoun (Erez) crossing, north of Beit Hanoun, north of the Gaza Strip. They levelled and combed lands while opening fire sporadically. However, neither casualties nor material damage were reported. On the same day, Israeli forces moved about 100 meters near Sofa military crossing in al-Shouka village, southeast of Rafah. They levelled lands and established sand barriers.

On 01 June 2016, Israeli forces moved about 100 meters to the east of al-Qarara village, northeast of Khan Yunis, south of the Gaza Strip. They levelled lands for few hours and withdrew later.

In addition, Israeli forces abducted a child who attempted to sneak into Israel, north of the Gaza Strip.

On 27 May 2016, Israeli bulldozers continued levelling lands in Deir Ballout, west of Salfit, to expand “Leshem” settlement that is established on a mountain between Deir Ballout and Kufor al-Deek villages. They levelled over 160 dunums belonging to Edris Abdullah and Ahed Abdullah. It is expected that Israeli forces continue levelling 1,000 other dunums for the interest of the same settlement.

Concerning settlers’ attacks, on 17 May 2016, a group of settlers from “Emanuel” settlement, east of Qalqilya, gathered on Qana Valley road. They threw stones at the Palestinian vehicles on the road, as a result, a taxi belonging to Ouda Abu Yunis (26), from Deir Estia village, northwest of Salfit, sustained material damage.

160 dunums of land in Deir Ballout village, west of Salfit, were demolished.

Israeli forces continued their efforts to create Jewish majority in occupied East Jerusalem. A Palestinian civilian was obliged to self-demolish parts of his house in Silwan village.

Following the Friday prayer, on 27 May 2016, dozens of Palestinian young men gathered at the southern entrance to al-Jalazonerefugee camp, north of Ramallah, near an UNRWA school for boys, 300 meters away from the fence of “Beit Eil” settlement, to organize a peaceful demonstration in protest against the Israeli attacks in the Occupied Palestinian Territories. The demonstrators threw stones at the settlement fence. Israeli forces stationed in the area fired live bullets, rubber-coated metal bullets, sound bombs and tear gas canisters at the protesters and then chased them into the camp. As a result, a 19-year-old male was hit with a rubber-coated metal bullet to the head and was then taken to Palestine Medical Compound to receive medical treatment.

Following the Friday prayer, dozens of Palestinian civilians organized protests against the Israeli policies in the Occupied Palestinian Territories at the western entrance to Silwad village, northeast of Ramallah. The protesters set fire to rubber tires and threw stones and Molotov cocktails at the soldiers, who immediately fired live bullets, rubber-coated metal bullets, sound bombs and tear gas canisters in response and chased them into the village. As a result, many civilians suffered tear gas inhalation and others sustained bruises as Israeli soldiers beat them up.

Following the Friday prayer, 27 May 2016, dozens of Palestinians and Israeli and international human rights defenders organised protests against the annexation wall and settlement activities in Bil’in and Nil’in villages, west of Ramallah, al-Nabi Saleh village, northwest of city, and Kafur Qaddoum village, northeast of Qalqilia. Israeli forces used force to disperse the protesters by firing live bullets, metal bullets, tear gas canisters and sound bombs and chased the protesters into the olive fields and between houses. As a result, many civilians suffered tear gas inhalation and others sustained bruises as Israeli soldiers beat them up.