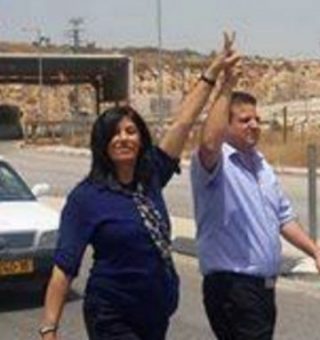 The Israeli authorities released, Friday, elected Palestinian legislator, senior political leader of the Popular Front for the Liberation of Palestine (PFLP) Khaleda Jarrar, after holding her captive for fourteen months.

Her release came one month before ending her prison term, under an ‘Administrative Release’, a practice sometimes used by Israel with prisons are overcrowded.

The army kidnapped the legislator on April 2nd of 2015, and on April 5th, she was sentenced to six months, under arbitrary Administrative Detention orders, without charges.

On April 15th 2015, the Israeli military prosecutor’s office filed an indictment of twelve charges against Jarrar, including what it called ‘membership in an illegal organization,’ in addition to ‘holding and participating in protests’ in solidarity with Palestinian political prisoners.

On December 6th 2015, an Israeli court sentenced, the democratically-elected legislator to 15 months. Jarrar was also in charge of the Palestinian Detainees’ file.

The prosecution alleged she violated a travel ban order, and “encouraged attacks against Israel.”

Jarrar is a Palestinian feminist, human rights activist and senior lawyer for the PLO.

She was elected to PLC in January 2006 as one of the PFLP’s three deputies and has continued to serve as an elected representative ever since.

|June 23, 2015 — First Time To See Family Since Her Abduction; Jarra Hugs Her Daughters In Court|

She is also the Palestinian representative on the Council of Europe and is currently head of the Prisoners Committee of the PLC. She played a major role in Palestine’s application to join the International Criminal Court.

Her release brings the number of legislators, imprisoned by Israel, to six, including Fateh leader Marwan Barghouthi, and the Secretary-General of the PFLP Ahmad Saadat.