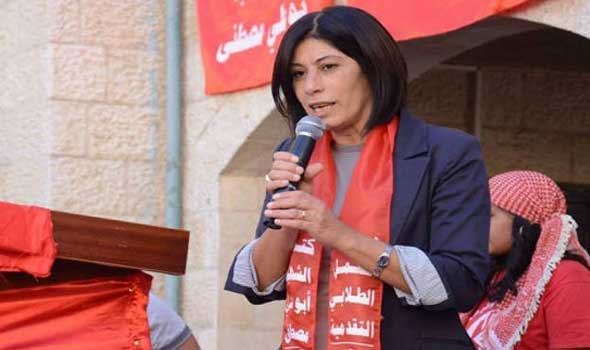 An Israeli court sentenced, Sunday, democratically-elected leftist Palestinian legislator, and a senior political leader of the Popular Front for the Liberation of Palestine (PFLP), Khaleda Jarrar to 15 months imprisonment. The army kidnapped the legislator on April 2nd of this year, and on April 5th, she was sentenced for six months imprisonment, under arbitrary Administrative Detention orders, without charges.

On April 15, the Israeli military prosecutor’s office filed an indictment of twelve charges against Jarrar, including what it called ‘membership in an illegal organization,’ in addition to ‘holding and participating in protests’ in solidarity with Palestinian political prisoners.

The PFLP denounced the ruling and said it shows the unjust, chaotic and arbitrary nature of Israeli courts and the legal system in dealing with Palestinian political prisoners.

The PFLP reiterated its firm stance in not recognizing Israeli military courts, as they are part of the illegal occupation of Palestine.

It also demanded referring the file of all detained legislators to the United Nations, in addition to calling for an urgent meeting of the Security Council to discuss the issues of Palestinian political prisoners, including detained women facing constant violations.

‘Israel is deliberately targeting elected and senior political leaders of various factions in Palestine,’ the PFLP said, ‘Jarrar is an important political figure, a symbol for steadfastness and determination; she always held her head high and challenged the Israeli abuse and violations.”

The PFLP also stated that Israel is trying to increase its pressure, and is escalating its violations, against Palestinian women, holding important roles in leading the national struggle against the occupation.

Related:
First Time To See Family Since Her Abduction; Jarrar Hugs Her Daughters In Court