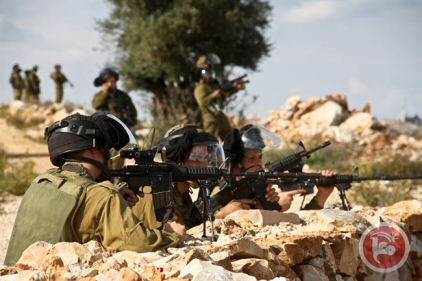 Israeli forces shot and wounded at least five Palestinians with live rounds in the latest clashes to erupt across the occupied West Bank and Gaza on Sunday, Palestinian sources said.Medics told Ma’an News Agency that a Palestinian child was left in critical condition after he was shot in his abdomen, during clashes at the entrance to Silwad village, to the east of Ramallah.

The boy was taken to the Palestine Medical Complex for treatment where he underwent an operation, but no further details on his identity or condition were provided.

Meanwhile, in the Gaza Strip, a Palestinian in his 20s was reportedly shot and wounded during clashes near Gaza’s border fence to the east of Buriej refugee camp in the central Gaza Strip, locals said.

The young man was hit in his abdomen and taken to Shuhada al-Aqsa hospital for treatment.
A spokesperson for the Palestinian Red Crescent said that another three Palestinians were hit with live rounds during clashes across the occupied West Bank on Sunday.

He also said that 11 others were hit with rubber-coated steel bullets, while at least 30 Palestinians suffered excessive tear gas inhalation.

The occupied Palestinian territory has seen a wave of unrest since the beginning of October, with Palestinians taking part in almost daily demonstrations. Israel’s severe crackdown on the popular protests has left more than 10,000 Palestinians injured.

See also: Palestinian Killed after Alleged Attack in Jerusalem, Teen Shot in the Back during West Bank Clashes