Netanyahu to Kerry: Israel Will Not Be A ‘Bi-national’ State 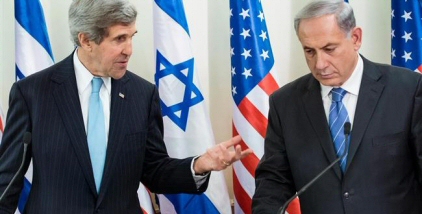 Israeli prime minister Benjamin Netanyahu, on Sunday, rejected statements made by US Secretary of State, John Kerry, that Israel is shifting towards being a “bi-national state”.According to Jpost Israeli news outlet, Netanyahu said “I want to make clear, Israel will not be a bi-national state,” under claims that the Palestinian Authority “does not want peace”, and “calls for incitement” against the occupation.

Netanyahu said, according to the PNN, that when Erekat not only does not condemn the terrorist acts but, rather, pays a condolence call on the family of a terrorist, he “gives backing and encouragement to acts of terror,” referring to Erekat’s condolence call to the family of Mazrn Oraiba, who was shot-dead by Israeli forces at Hizma checkpoint, under the pretext of a car-ramming attack.

Netanyahu’s opposition came after Kerry’s statement at the Saban Forum in Washington, on Saturday, when he said “the truth is that many of those arguing against the PA simply don’t believe in two states.”

During the Israeli cabinet meeting, Netanyahu also took the chance to condemn the comments of the Swedish Foreign Minister, Margot Wallstrom against the Israeli terrorism, calling them “scandalous.”

John Kerry, speaking at the Saban Forum in Washington D.C., on Saturday, warned that current trends in the Israeli-Palestinian conflicts are leading to a one-state reality. Kerry also said that if the situation continues, it is unclear how long the Palestinian Authority can survive.

“If there is a risk the Palestinian Authority might collapse and Israel wants it to survive, shouldn’t Israel do more to help sustain it?” Kerry said.

According to Haaretz, Kerry added that the two-state solution for the Israeli Palestinian conflict mustn’t become a “slogan,” but warned that “current trends are leading for a one state reality.”

“We have to be honest about what a one-state solution looks like,” Kerry said, warning that Israel couldn’t maintain its character as Jewish and democratic, asking rhetorically what the international reaction would be to such a scenario, and saying that true peace with its neighbors will not be possible under such conditions.

In a related context, in May of 2014, Israeli Minister of Economy and head of the Jewish Home party Naftali Bennett suggested the demolition of a portion of the apartheid wall which surrounds the West Bank, offering an incentive of full Israeli citizenship for Palestinians affected by the move, but with the more strategical intention of annexing Area C to the state of Israel, amidst of new wave of increased settlement expansion.

During the 2013 Israeli-Palestinian peace talks led by none other than Kerry, Israeli officials announced and, eventually, carried out in full force, plans to build thousands of additional homes in illegal settlements across the occupied West Bank, while continuing to further seize lands, demolish homes and agricultural resources and, thus, leaving scores of Palestinian families severely disenfranchised and without so much as a roof over their heads to shelter them from inclement weather.

“The one-state solution is no solution at all for a Jewish, democratic Israel living in peace,” Kerry went on to say, Saturday.

Editor’s note: In stark contrast with Kerry’s statement, the First Amendment to the United States Constitution prohibits the making of any law respecting an establishment of religion, impeding the free exercise of religion, abridging the freedom of speech, infringing on the freedom of the press, interfering with the right to peaceably assemble or prohibiting the petitioning for a governmental redress of grievances. It was adopted on December 15, 1791, as one of the ten amendments that constitute the Bill of Rights. ~ Wikipedia

Kerry said that the distrust between the two sides has never been more profound. “President Abbas feels great despair – more than I have ever heard him,” Kerry said.

Saying that peace is the best way to achieve security, Kerry added that first of all, the violence must stop. “There’s no justification for violence against civilians. Israel has the right and the obligation to defend itself,” he said.

“We need people to act in restraint. The Palestinian leadership should stop the incitement and condemn terror attacks,” he said.

Regarding the fight against Islamic State, Kerry seemed to be rebutting statements made by Israeli Defense Minister Moshe Ya’alon the day before about a lack in U.S. leadership, and laid out U.S. actions and policy against ISIS and in Syria.

“We want a transition to a unified non-sectarian Syria,” Kerry said, adding that the U.S. isn’t naïve about the diplomatic effort in Syria. “It’s difficult,” he admitted. However, he added that the Vienna talks were “the most promising diplomatic effort regarding Syria in the last years.”

Regarding the nuclear deal with Iran, Kerry addressed Israel directly, saying that he knows Israel still has concerns, but that the U.S. is “convinced that we will know what Iran is doing.”

“Under the nuclear deal all of Iran’s pathways to a bomb are blocked,” he said, adding that it was the deal was the right thing to do, “regardless of whether they will change their behavior or not.”

Also of interest: Hotovely: ‘The whole land of Israel belongs to the Jews”