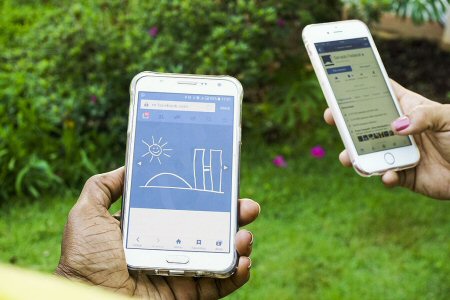 Palestinian doctors and engineers claim to have developed an app that would allow women to detect early signs of breast cancer by simply snapping a picture from their phones.

Al-Quds University released a statement saying that Dr. Zaidoun Salah and engineer Yazid Al Badarin invented the app, which is still in its developmental phases.

The university hailed the app as a ”revolutionary discovery (that) will benefit women worldwide.”

“Unlike the mammogram which can only be done once every two years, this patented App allows the women to do it infinitely without harmful side effects. Salah says the App and the mammogram complete each other,” the statement said, according to Ma’an News
Agency.

“We have experimented on mice and the results have been an extraordinary success, and has encouraged experimenting on women in a Bethlehem medical center,” Salah said, adding that the app will be available for use upon the results of these experiments.

By taking a photo from their phone, women can use the app to instantly analyze her body and reveal early symptoms. Afterwards, she can consult with a specialized physician, who will conduct further tests to determine if the tumor is benign or not.

Al-Quds University highlighted its fight against breast cancer, as the disease has been a leading cause of death in Palestine.

This year alone, the statement highlighted, the Palestinian Health Ministry recorded that for every 100,000 persons living in the occupied West Bank, 83.8 percent of cases were cancer patients — 52.5 percent females and 47.5 percent males.

“This brilliant Palestinian invention is not unsystematic but comes as part of our relentless efforts to contribute to the treatments of paramount health issues nationally and internationally,” said the president of the university.