Palestinian Forced to Demolish His Own Home in Jerusalem 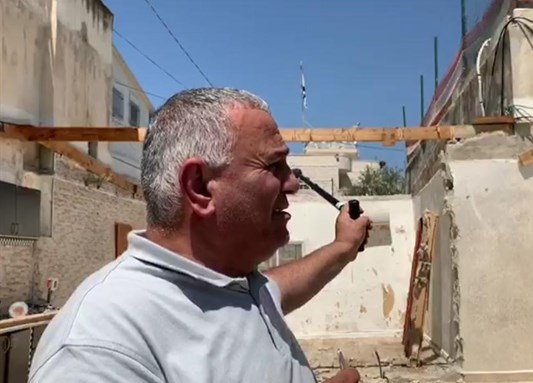 Israeli authorities in Jerusalem forced a Palestinian homeowner to demolish his own home, using only hand tools, on Wednesday.

Jamil Masalmeh told reporters that he was in mourning for his home, which he was forced to demolish on Wednesday or else pay a 48,000 NIS fine.

His home is located in Silwan, an area targeted by Israeli authorities for annexation into Israel by the use of force.

The municipality gave the resident a 24-hour period to demolish the entire house (walls and ceilings), or be fined 48,000 shekels.

Masalmeh was forced to move in with his son, since he had no other place to go once he lost his home due to the Israeli order.

The Israeli authorities claim it was “built without a permit” despite the fact that Israel has not issued any permits to Palestinian landowners since it took over the city of Jerusalem by military force in 1967.

Israeli Jewish landowners, however, are issued permits nearly 100% of the time they apply. This double standard is one of the reasons that Palestinians in Jerusalem say they are being ‘ethnically cleansed’ from their homeland in Jerusalem.

More than 110 “residential, agricultural and commercial” buildings have been demolished this year in various neighborhoods of Jerusalem, more than 30 of which were demolished by their owners, who faced steep fines if they refused to carry out the demolition.

Given the high cost of bulldozers, many, like Masalmeh, had to demolish their homes by hand, using sledgehammers and other hand tools.