Palestinian Injured After Israeli Colonist Rammed Him With Car In Hebron 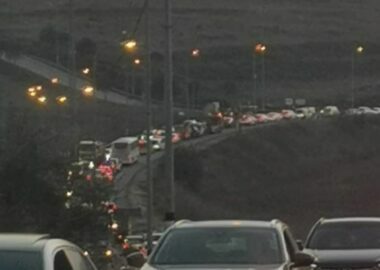 Palestinian medical sources said a man was injured, Monday, after an illegal Israeli colonist rammed him with his car, east of Sa’ir town, north of the southern West Bank city of Hebron.

The sources said that man, Sobhi Mohammad Abdul-Fattah Shalalda, 32, suffered various cuts and bruises to different parts of his body, when the colonist rammed him with his car east of Sa’ir.

The Israeli assailant is from the illegal Afsar (also known as Metzad) colony, built on Palestinian lands owned by the villagers of al-Qanoub, east of Sa’ir.

Shalalda received treatment by Palestinian Red Crescent medics, who were called to the scene, before they moved him to the Hebron Governmental Hospital, suffering moderate wounds.

The incident took place on a bypass road, one of the numerous roads used by illegal Israeli colonists, and witness dozens of similar incidents over the years.

Also on Monday, Israeli colonists carried out dozens of attacks against the Palestinians and their cars in various main roads in the occupied West Bank, resulting in damage to scores of cars, and the injury of at least three Palestinians near Nablus, in northern West Bank.

The attacks took place near Nablus, Qalqilia, Hebron, and various other areas in the West Bank.

Dozens of colonists also closed the Deir Sharaf village junction, west of Nablus, Huwwara junction, south of Nablus, Kidumim junction near Qalqilia, and started throwing rocks at the Palestinians and their vehicles, causing damage to dozens of vehicles, and injured at least three Palestinians.