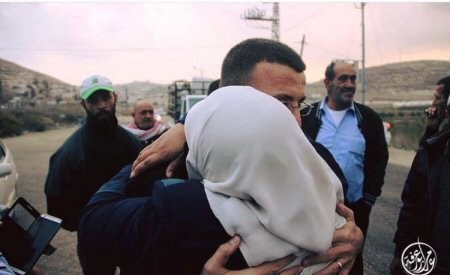 Al-Qeeq is one of hundreds of Palestinians who have been targeted for public statements, speeches, and even social media writing, for arrests, administrative detention and imprisonment via the military courts. He was sentenced to 10 months in Israeli prison.

Upon his release, Al-Qeeq said that “the prisoners looked to the resistance in Gaza as a sign of hope for freedom and liberation from the prisons of injustice and oppression,” noting that the prisoners are at the spearhead of the Palestinian people, separated from their beloved families and children for the Palestinian cause and nation. He urged unity and cohesion with the compass point of the Palestinian prisoners, especially the veterans who have spent decades in Israeli prison.

Fayha Shalash, al-Qeeq’s wife and a fellow journalist, said that her husband’s release was a “new victory over the Zionist occupier,” urging support for the over 6,200 Palestinian prisoners who remain inside Israeli prisons.