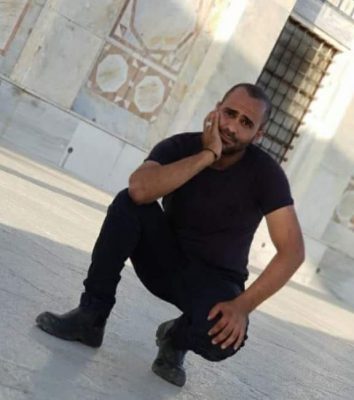 Local sources in Jerusalem and Israeli sources reported Friday afternoon that a Palestinian was shot dead in occupied Jerusalem, after attempting to stab an Israeli police officer.

The Palestinian man, from the town of Umm al-Fahm in Israel, was shot and killed by Israeli police after attempting to stab an Israeli police officer in the Old City of Jerusalem, near the Damascus Gate.

Israeli police released a video showing the street from above, with people walking, then a young man pulling out a knife and trying to stab an Israeli police officer, with the officer then moving backward behind a barricade. But the released video cuts off at that point, and does not show the officers shooting the man.

No Israelis were hurt in the incident.

Ahmad Mahameed, 30, was identified by Israeli police as the man who was killed. He had never been arrested by Israeli authorities before, nor was he on any ‘wanted’ list of suspects.

The Israeli media alleges that Mahameed left the Council Gate at the al-Aqsa Mosque at about 5:30pm. He then turned toward a group of policemen stationed a few meters away, and tried to stab one of them with the knife he was holding.

Mahameed’s hometown, Umm al-Fahm, is one of the few Palestinian towns that survived the expulsion of Palestinians in 1948 for the creation of the state of Israel. It is now home to 60,000 residents, all Palestinians. Israeli authorities have failed to provide adequate, electric, plumbing or sewage facilities to the town, and frequently deny requests from the town’s council for basic services. Though the town is located near Jenin, and has an historic relationship with the city, it has been cut off from all access to Jenin since the construction of the Israeli Annexation Wall in 2003.

Following the incident, Israeli police and military cordoned off a large area of the Old City of Jerusalem, including the al-Aqsa Mosque, and prevented Palestinians from entering for evening prayers. They also forced all worshipers who were in the mosque to leave.

In addition, the Israeli army invaded Mahameed’s town, Umm al-Fahm, closed the entrances to the town and ransacked his family home, taking several members of his family into custody for interrogation.

The commander of the Jerusalem District, Major General Yoram Halevy, told media that he deployed troops throughout the area, interrogating multiple suspects in the area of the Mosque, and removing the public from the scene.

The Palestinians responded to the decision to close the Al-Aqsa Mosque by calling for evening prayers outside at the door to the mosque. Hundreds of Jerusalemites gathered and recited the

Maghrib and ‘Isha’ prayers at the doors of the mosque and demanded that it be reopened.

Worshipers said that they will continue their prayer protest until the reopening of Al-Aqsa Mosque.