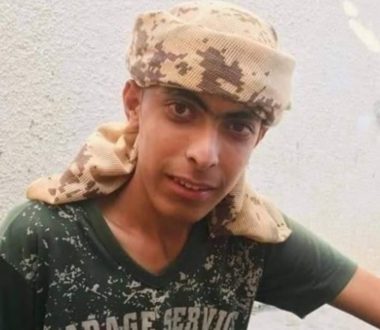 Israeli soldiers killed, Friday, one Palestinian was killed and many others, when the army attacked a group of protesters, hundreds of meters away from the perimeter fence.

Israeli soldiers, stationed in their posts and army vehicles across the fence, fired live bullets, rubber-coated steel rounds, and high-velocity gas bombs at several Palestinians, killing one and injuring at least five others, east of Khan Younis, in the southern part of the Gaza Strip.

Some of the wounded were moved to the hospital while many others were treated in the field hospitals.

Dr. Ashraf al-Qedra, the spokesperson of the Health Ministry in Gaza, has confirmed that the soldiers killed Fahed Mohammad Walid al-Astal, 16, after shooting him with a live round in the abdomen.

Dr. al-Qedra added that the soldiers also shot at least five other Palestinians, and caused many to suffer the effects of teargas inhalation.

The incident took place when approximately twenty Palestinians gathered on Palestinian lands, a few hundred meters from the fence; the Israeli army said it was “investigating the incident.”

Talal Abu Tharifa, a member of the Political Bureau of the Democratic Front for the Liberation of Palestine (DFLP) said the Palestinians gathered at the Great Return March encampment, east of Khan Younis, and marked International Day of Solidarity with the Palestinian People.

Abu Tharifa added that the Palestinians were at least 700 meters away from the perimeter fence and that the soldiers opened fire on them regardless.

It is worth mentioning that the Great Return March processions have been suspended for the third week, but have not been canceled. 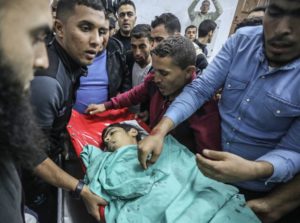 The Committee for the Great Return March Processions said the temporary halt of the processions is not related to any “truce talks,” but to avoid further casualties after Israel threatened to escalate its already excessive use of force.

Over 348 Palestinians have been killed in the Gaza Strip, and about 18,500 others injured by Israeli forces since the beginning of the Great March of Return protests at Gaza’s border, on March 30, 2018.

The Palestinian Center for Human Rights (PCHR) documented 215 killings by Israel since the outbreak of the Great Return March protests on 30 March 2018, including 47 children, 2 women, 9 persons with disabilities, 4 paramedics and 2 journalists.

Additionally, 14,713 were wounded, including 3,696 children, 387 women, 253 paramedics, and 218 journalists, noting that many of those injured had sustained multiple injuries on separate occasions.

These figures do not include the Palestinians who were killed by Israeli bullets, missiles, and shells, during Israeli offensives on Gaza.

The weekly protests call for lifting the Israeli blockade of the Gaza Strip and for the unimpeded return of the Palestinian refugees, to their ancestral homes in pre-1948 Palestine.