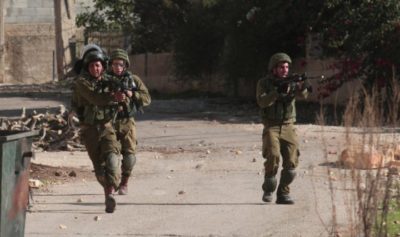 According to the Wafa News Agency, Israeli forces transferred a Palestinian man to a hospital after severely beating him in his house in Abu Shkheidim village, northwest of Ramallah, said an attorney on Wednesday.

According to al-Hashem, Shalalda has been held at the hospital and denied access to a lawyer since his detention.

Al-Hashem could not ascertain any details about Shalalda’s health condition, but pledged that PPS would take necessary legal proceedings to learn about it.

Shalalda was detained along with his son, Mahmoud, 21, during an Israeli military raid into Abu Shkheidim during which soldiers detained Assem Barghouthi, suspected of carrying out an attack which killed two Israeli soldiers on December 13.

This story was originally published by the Wafa News Agency.