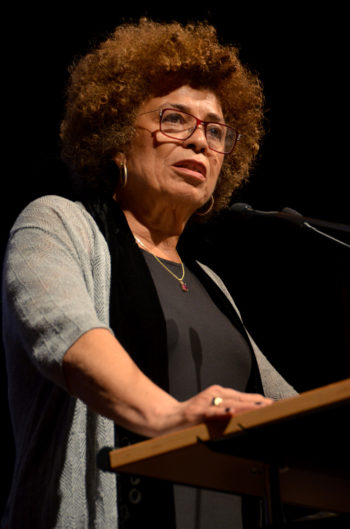 (from the Electronic Intifada)

American academic Angela Davis says she is “stunned” at the decision of the Birmingham Civil Rights Institute in Alabama to revoke a human rights award it was planning to give her at a gala next month.

In a statement on Facebook, the iconic Black intellectual and activist said that the BCRI “refused my requests to reveal the substantive reasons for this action,” but that she “later learned that my long-term support of justice for Palestine was at issue.”

Reaffirming her “support [for] Palestinian political prisoners” and “opposition to policies and practices of the state of Israel,” Davis added that the rescinding of the award and invitation to speak was “not primarily an attack against me but rather against the very spirit of the indivisibility of justice.”

Davis said that the trip to Birmingham to receive the BCRI award was to be the “highlight of my year,” but despite its cancellation she would still travel there next month “for an alternative event organized by those who believe that the movement for civil rights in this moment must include a robust discussion of all of the injustices that surround us.”

The BCRI’s decision is generating a growing backlash.

On Tuesday, the city council in Birmingham, Alabama, unanimously adopted a resolution “recognizing the life work of Angela Davis” – an implicit rebuke to the BCRI.

Davis, who suffered incarceration and political persecution for her support for Black liberation, grew up in Birmingham’s Dynamite Hill, a neighborhood that got its name from the frequency of bombings and violent attacks targeting its residents by white supremacists.

“Everybody respects her but us. In academic communities as well as society and various groups,” Hoyt added. “I’m embarrassed. I’m embarrassed to even serve in a city that would do that.”

On Monday, Black activists called for leadership changes and protests at the BCRI, an institution ostensibly established to honor and advance the cause of civil rights.

Earlier, Birmingham Mayor Randall Woodfin expressed his “dismay” at the decision to cancel the award gala, which he said came “after protests from our local Jewish community and some of its allies.”

Local media revealed that pressure had come from, among others, the Birmingham Jewish Federation, a staunchly pro-Israel communal group.

Davis is the second high-profile Black intellectual to be targeted by pro-Israel lobby pressure in recent weeks.

In November, Marc Lamont Hill was dismissed from his role as a CNN political commentator following an Israel lobby campaign of lies and smears misrepresenting a speech he made at the United Nations in support of Palestinian rights and BDS – the boycott, divestment and sanctions movement to pressure Israel to respect international law and human rights.

Temple University also faced pressure from the Zionist Organization of America to dismiss Hill as a professor – a step it has not taken amid warnings that this would violate Hill’s First Amendment rights.

Last June, the University of Vienna banned a public lecture by Dhoruba Bin-Wahad after a smear campaign against the veteran Black American activist, author and former political prisoner, and against the Palestine solidarity groups co-sponsoring the event.

The civil rights group Palestine Legal called the BCRI’s decision to rescind the honor to Angela Davis “the latest incident in a well-documented nationwide campaign to censor and punish critics of Israel.

“So are attempts by Israeli government officials to divide Black leaders and suppress those who draw connections between freedom struggles of Black Americans and Palestinians.”

* This article was reposted from the Electronic Intifada