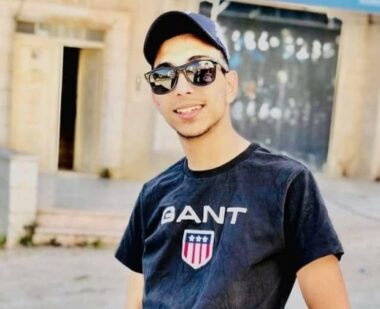 The Palestinian Detainees’ Committee released a video, Wednesday, showing Israeli soldiers releasing their dog to maul a Palestinian before they abducted him last Monday, and denounced the serious violation.

The Committee stated that the detainee, Malek Mualla, 19, was forced out of an industrial structure and wasn’t trying to run or hide; however, the soldiers released their dog to maul him although he was fully complying with their orders.

The Palestinian, who works as a night guard at the industrial facility in the al-Biereh city, in the central West Bank, was attacked after the soldiers surrounded the facility.

The soldiers released their dog on the detainee before it started mauling him all over his body before they abducted him and took him to an unknown destination.

The army has not released any information about the incident that only became known because of the captured surveillance video.

Malek’s family still has no information about his whereabouts and the extent of his injuries because Israel has not released any.

The Detainees’ Committee said that the attack was vicious and ruthless and urged human rights groups to intervene and expose the Israeli crimes against the Palestinian people.

Palestinian Prime Minister Mohammad Shtayyeh condemned the excessive, cruel, and unjustified use of force against the unarmed young man who didn’t try to escape or attack the soldiers, yet they released their dogs to maul him.

In a statement to the press, Shtayyeh called on the United Nations and all international and regional legal and human rights groups to denounce the attack and to act on stopping the dangerously escalating Israeli crimes, violations, and apartheid policies against the Palestinians, including children.