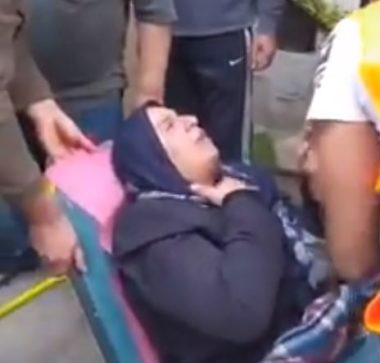 A Palestinian woman from Ya’bad town, west of the northern West Bank city of Jenin, was rushed to a hospital, on Thursday morning, after Israeli soldiers invaded her home and abducted two of her sons, including a child.

The Palestinian Prisoners’ Society (PPS) has reported that the soldiers stormed and ransacked a home in the town, before abducting Mo’tasem Ribhi Asfour, 19, and his brother, Khaled, 13.

The soldiers violently searched the property before abducting the two siblings, an issue that caused a severe anxiety attack to their mother, who was soon rushed by Palestinian medics to a hospital in Jenin.

It is worth mentioning that the child, Khaled, was also abducted by the soldiers several days ago, and was released shortly afterwards until the soldiers came back for him, and his brother, earlier Wednesday.

The woman is also the wife of a Palestinian political prisoner, held by Israel, identified as Ribhi Asfour.

The Israeli army has intensified its invasions, and very violent searches of homes, in addition to abducting many Palestinians, including children and women, in the town after one soldier, identified as Amit Ben Ygal, 21, was killed, on May 12th, 2020, during a pre-dawn invasion into Ya’bad.

On May 13th, Israeli soldiers killed a Palestinian child, identified as Zeid Fadel Qaisiyya, 15, after shooting him with a bullet to the head, during an invasion of Zeid neighborhood in the al-Fawwar refugee camp, southwest of the southern West Bank city of Hebron.