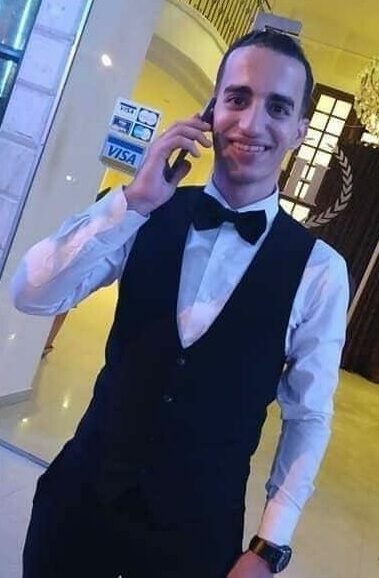 A heartbreaking report by Israeli journalist Gideon Levy has laid bare the story of 22-year old Jalal Sharafi, who died last month when his urgent application to transfer to an Israeli hospital for a bone marrow transplant was delayed.

According to Levy, Jalal’s life could probably have been saved if the Civil Administration in the territories had allowed him to be moved to an Israeli hospital on time.

Jalal was an otherwise healthy young man who was stricken with an unknown illness in mid-March – he felt weak, his skin was pale, he was worried that it might be cancer.

So his father, 47-year old Nasser Sharafi, immediately brought him to the Inodnesian Hospital in Gaza, where he works as head of the Maintenance Department.

Jalal, who just graduated from Al-Quds University in the Department of Education and planned to become a teacher, on July 16th became the latest victim of the Israeli military government that rules every aspect of life for Palestinians in the West Bank and Gaza.

In his article, Levy detailed the process that led to Jalal’s premature and preventable death:

He writes, [Jalal] “was diagnosed with aplastic anemia, a disease in which the bone marrow does not produce enough blood cells, of all varieties. Sharafi’s doctors promised him that he would not die; his disease could be treated…

“From that day, March 23, until the day he died, Sharafi remained in Rantisi Hospital. His immune system became impaired and there was concern of infections.

“He received all of the treatment Rantisi could provide, but his body did not respond and his condition did not improve. A few weeks later, the hospital reached the conclusion that only a bone-marrow transplant could save him. On May 4, Sharafi was given a referral by the hospital for a transplant at Sheba Medical Center, Tel Hashomer. His condition begin to deteriorate, he had a constant high fever, but overall the situation was still not dire.

“On July 7, Sharafi was told that he had an appointment for further diagnosis and a bone-marrow transplant at Sheba on July 12. He and his family looked forward to the day eagerly. They had heard that Sheba was one of Israel’s biggest hospitals and hoped its staff would save his life. Like all young Gazans, Sharafi had never been outside the Strip; his whole life had been spent between Gaza City and Rafah.

“The personnel in Sheba tried to arrange for the new patient’s arrival via the Israeli District Coordination and Liaison Office, but it emerged that Sharafi was denied entry for ‘security’ reasons. Although he was by now almost completely bedridden, he apparently still constituted a clear and present danger to the safety of the State of Israel.”

In addition, Israeli authorities denied a permit for his mother to accompany him, saying she was also banned for undisclosed “security reasons”. The family turned to Physicians for Human Rights – Israel, who managed to get Jalal’s permit approved – but not his mother’s.

They tried a 60-year old uncle – but his application was denied for ‘security reasons’. Finally, they found a distant relative who would be acceptable to Israel – Rawaida Sharafi, 60. By the time her permit was approved, however, the border had closed for the night and the appointment at the hospital would need to be rescheduled.

So when the ambulance finally arrived to take Jalal from Rantisi Hospital in Gaza City to cross through the Erez checkpoint into Israel to get to Sheba hospital for a bone marrow transplant, it was already too late.

Jalal had taken his last breath just an hour before the ambulance arrived.

According to Physicians for Human Rights, during June and July, the organization handled 195 urgent requests of seriously ill patients, most of them suffering from cancer – five times more than the usual. Only half the requests were approved by Israel.

Under the new mechanism, the United Nations – through the World Health Organization (WHO) – was to mediate between the Palestinian Civilian Affairs Committee, which is responsible for filing permit applications on behalf of the PA, and the Israeli authorities at Erez Crossing. However, despite the UN’s statement and its efforts to launch the temporary coordination mechanism, the mechanism has yet to begin operations.

Even though Israel currently permits treatment only in urgent cases, only half of the applications submitted via Physicians for Human Rights – Israel in June and July received approval. In most of these cases, Israeli authorities did not provide an answer in time so that patients missed their scheduled appointments and were forced to re-apply. At least three Gaza patients – two infants and a 22-year-old man – died after being referred for urgent, lifesaving treatment outside Gaza that they were denied by Israeli authorities.

Delays at Erez Crossing: In some cases, even though their permit request had been approved, patients who arrived at Erez Crossing were detained there for a long time before being allowed through the crossing, while others were even sent home. The paper also reports the case of a patient with leukemia who was detained at Erez Crossing for four hours and was questioned by the ISA (Israel Security Agency) as he lay in an ambulance – in contravention of medical ethics – before being allowed to leave Gaza to receive his medical treatment.

Recently Israeli authorities have instituted the stipulation that applications would not be reviewed unless patients provide the results of medical tests they have undergone, such as MRI, X-rays and biopsies. This requirement constitutes a further burden on patients and in many cases causes delays in handling the applications.

Bogus claims that treatment is available in the Gaza Strip: In order to obtain medical treatment outside Gaza, patients must prove to the Israeli authorities that the therapy they need is unavailable in the Gaza Strip. Over the past two months, several cases have been documented of oncology patients who were refused permits to leave Gaza on the grounds that the therapy they need is available in Gaza, even though this was not the case.

Providing last-minute answers: In a substantial proportion of applications, a decision is only given at the very last minute, sometimes as late as the day that the patient has to leave for treatment. This situation does not give patients the opportunity to properly prepare either for the trip or for the duration of hospitalization or treatment, and imposes additional strain and tension to an already stressful situation.

PHRI stated: “Every day that goes by without the international mechanism in operation takes a toll in human life. Ultimately, since Israel has control over the crossings and decides all matters regarding patients’ travel for treatment, Israel must act to safeguard patients’ lives until a solution is found. In the long run, such a solution necessitates lifting the blockade imposed on Gaza and ensuring free access between the Gaza Strip, the West Bank and East Jerusalem. Until that time Israeli authorities must rescind the stringent criteria it has imposed and also allow patients in non-emergency situations to leave Gaza for treatment. In addition, Israel must revise the online form for applying for permits to leave Gaza for medical treatment so that patients can easily check on the review status of their application. Finally, Israel must ensure that responses to applications are provided in a timely manner that is compatible with the urgency of the medical condition.”