The Israeli Air Force fired, on Thursday at dawn, many missiles into several parts of the Gaza Strip, causing damage to many buildings, including twenty homes and at least one school, in addition to targeting farmlands.

Media sources said the army fired at least three missiles into a post, reportedly run by an armed resistance group in Gaza, in addition to another post in the central district, and a security center in Beit Hanoun, in northern Gaza.

They added that the soldiers fired more missiles into a post in Deir al-Balah, in central Gaza, and farmlands in the

Sofa area in Rafah, in the southern part of the Gaza Strip. 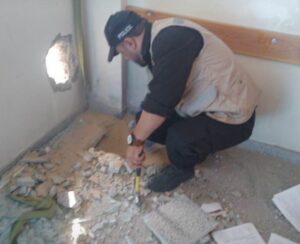 The Israeli missiles also caused damage to more than twenty Palestinian homes, west of Gaza city; there have been no immediate reports of injuries.

The Israeli army said it was retaliating to the launching of flammable balloons from the Gaza Strip into nearby Israeli settlements over the past week.

The army spokesperson claimed that one of its targets was a naval post for Hamas, in addition to other infrastructure and lands.

Prior to the latest bombardment on Gaza, Israeli Defense Minister Benni Gantz decided to stop the entry of fuel into the besieged Gaza Strip, in addition to reducing the fishing zone to only eight nautical miles.