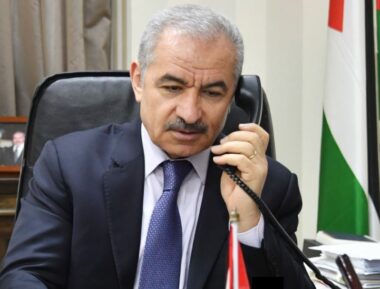 Palestinian Prime Minister Mohammad Shtayyeh denounced, on Thursday at night, the seriously escalating attacks, carried out by the illegal Israeli colonialist settlers against the Palestinians in the West Bank, and described them as organized terrorism.

Shtayyeh said the colonists attacked and injured many Palestinians, including women and children, after hurling stones and Molotov cocktails at homes and cars, in several parts of the West Bank.

He called on the new American administration of President Joe Biden to intervene and act on ending these crimes, especially after the polices of former President D. Trump have led to serious Israeli escalation of settlement construction and expansion, which in turn also encouraged the fanatic colonists to escalate their assaults and crimes against the Palestinian people and their property.

The Prime Minister also expressed hopes that the Biden administration would act on implementing United Nations Security Council resolution #2334 which reaffirmed the international condemnation of the colonies, and the obligation of Israel, the occupying power, to abide scrupulously by its legal obligations and responsibilities under the Fourth Geneva Convention relative to the Protection of Civilian Persons in Time of War, of 12 August 1949, and recalling the advisory opinion rendered on 9 July 2004 by the International Court of Justice.

He also called on the United Nations to act on providing the Palestinian people with the needed international protection, and on ending the escalating Israeli attacks.

His statements came following a serious escalation by the colonists, on Thursday evening, in several parts of the occupied West Bank, causing property damage and wounding many Palestinians, including a child.