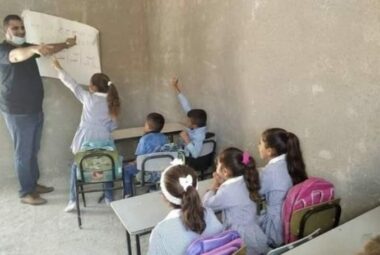 On Wednesday afternoon, Israeli forces used D9 Caterpillar Armored bulldozers (manufactured in Illinois, in the US) to demolish a Palestinian primary school east of Ramallah.

The school had recently been constructed with the assistance of international aid from the Norwegian Refugee Council and the European Council, and was located in the village of Ras al-Teen.

The youth of Ras al-Teen had been excited about the opening of their new school last month. Without the school, the 50 young students it was serving will now have to walk 5 kilometers to the nearest primary school in al-Mughayyir village.

The international aid organizations had managed to construct the school in time for the start of the school year, and it was serving 1st through 6th graders.

However, Israeli military forces, which govern the Palestinians in the West Bank under martial law, decided that the school must be destroyed. Their justification for the destruction was that the school had been ‘constructed without a permit’.

However, Israeli military authorities in the West Bank have not issued permits for Palestinians to be able to construct anything on their own land since 1967.

The Norwegian Refugee Council (NRC) said it is concerned about the Israeli military government’s destruction of the school.

The European-funded Palestinian primary school was the first school in Ras al-Tin herding community in the central West Bank.

According to NRC Regional Director Carsten Hansen, “These are some of the most vulnerable children, whose life is already extremely hard, and Israel as the occupying power has a duty to ensure that they get their education and basic service. Instead, it uses its power to do the opposite, denying them their fundamental right to education and paving the way for illegal settlement expansion.”

Ramzy Baroud noted in the Palestine Chronicle, “Israel’s strategy in destroying the infrastructure of the Palestinian schooling system is a brutal logic, that has guided the Israeli government strategy regarding Palestinian education for 70 years. It is a war that cannot be discussed or understood outside the larger war on Palestinian identity, freedom, and, in fact, the very existence of the Palestinian people.”