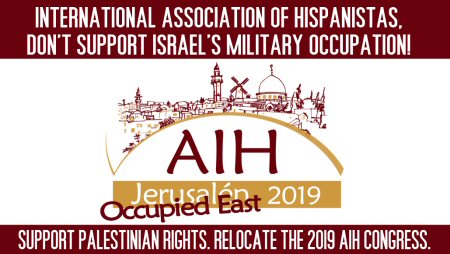 February 19, 2019 / By Palestinian Federation of Unions of University Professors and Employees (PFUUPE)

The Palestinian Federation of Unions of University Professors and Employees (PFUUPE) and The Palestinian Campaign for the Academic and Cultural Boycott of Israel (PACBI) urge the Asociación Internacional de Hispanistas (AIH) to move its July 2019 congress from Hebrew University. Holding the conference in any complicit Israeli institution would implicate the association in Israel’s grave violations of international law and Palestinian human rights.

Holding the AIH congress at Hebrew University whitewashes Israel’s decades-old military occupation and reinforces its unlawful claim of sovereignty over Jerusalem. The UN and the international community, with the notable exception of Trump’s xenophobic and anti-Palestinian administration, do not recognize Israeli sovereignty over any part of Jerusalem.

The AIH congress is sponsored by the Israeli government, which is actively working to rid Jerusalem of its indigenous Palestinian inhabitants, including through systematic home demolitions and forced expulsions. Hebrew University itself has taken legal action to evict Palestinian families and demolish their homes for the construction of campus facilities, in violation of international law.

Israel regularly denies Palestinians permits to travel abroad to further their research or attend conferences. During the past academic year alone, Israel denied entry or refused visa renewals for dozens of international staff and faculty at Palestinian universities. This systematic attack on the Palestinian right to education is part of Israel’s policy of “scholasticide.”

In July, Hebrew University hosted a recruitment event for Shin Bet, Israel’s notorious secret police, which has been condemned by the UN Committee Against Torture for its frequent use of torture and other illegal interrogation tactics on Palestinian political prisoners and child detainees.

We urge AIH to relocate its 2019 congress outside of Israel and occupied East Jerusalem until Israel respects Palestinian rights as stipulated in international law.

We call on AIH members to stand in solidarity with Palestinian academics and demand AIH relocate the congress. And to boycott the conference if it is held at any complicit Israeli institution.

Palestinian Federation of Unions of University Professors and Employees (PFUUPE)

The Palestinian Federation of Unions of University Professors and Employees (PFUUPE) represents more than 6,000 Palestinian university staff at 13 institutions of higher education in the occupied Palestinian territory.