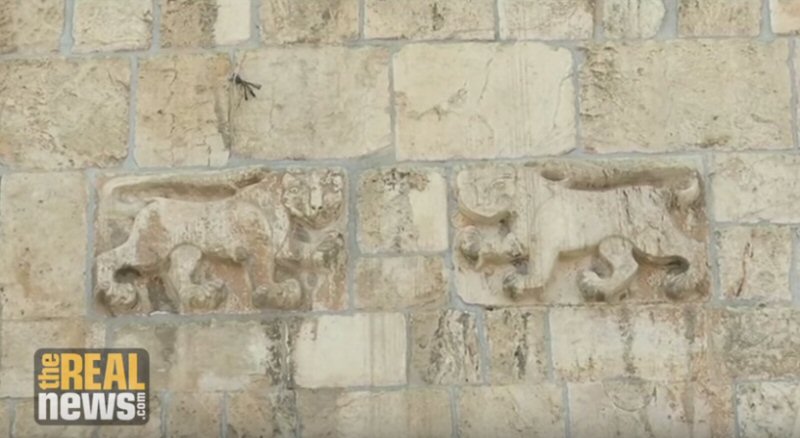 As the Al-Aqsa protests continue despite a deadly Israeli crackdown, writer Mariam Barghouti says Palestinians across the Occupied Territories “are reiterating their right to exist”.

AARON MATE: It’s The Real News. I’m Aaron Mate. Palestinians continue to protest Israeli restrictions in Jerusalem amid a deadly crackdown. Israeli forces have shot dead at least four Palestinians and wounded hundreds more since Friday. Three Israeli settlers were also stabbed to dead in a West Bank settlement. Palestinians have taken to the streets against new Israeli restrictions on the holy Al-Aqsa mosque compound, following a Palestinian shooting attack earlier this month. Worshipers are boycotting Israel’s control of Al Aqsa, praying in the streets outside. The recent spate of violence is the worst to hit the occupied West Bank in years, and there are fears it could worsen. Mariam Barghouti is a Palestinian-American writer who covers Palestine and the Israeli occupation. She joins me now from Ramallah. Mariam, welcome.

AARON MATE: Talk about what’s been happening since Friday, when the violence erupted, leading to initially the killing of three Palestinians, but these clashes have continued through the weekend.

MARIAM BARGHOUTI: Right. Well you have Palestinians in Jerusalem instigating these waves of protests across Palestine, in protest of basically, what it is essentially is a checkpoint near Lion’s Gate, near the old city of Jerusalem. And Palestinians have been confronting and protesting these measures that are being enforced by Israel as part of its larger systematic policy of encroaching on Palestinian life and controlling Palestinian daily life.

AARON MATE: When you say checkpoints in the old city, what do you mean?

MARIAM BARGHOUTI: I mean, you have Israeli soldiers that would check people’s IDs, you have what they’re saying are these metal detectors, but they mean so much more. And it’s basically this process to just move from one place to another in the same city, on the same street, where you are humiliated and you must endure this kind of degradation by Israeli forces, just to be able to move from one point to another.

AARON MATE: Okay, so Mariam, when we talk about what’s happening right now in Jerusalem, many people here are just hearing news that Israel wants to impose some metal detectors after there was a shooting attack in which some Palestinian gunmen killed two Israeli soldiers at the compound. But the standoff, or this protest, is about much more than that. Can you talk about what context might be missing from that picture?

MARIAM BARGHOUTI: Right. This is not an event that’s happening in a vacuum. It’s an accumulation of Israeli strategy and policies to control and dominate Palestinian life. It’s kind of this reinforcing the narrative that we are here, we are present, and we are going to continue controlling your life until you flee. Just recently, an Israeli minister told, warned Palestinian, basically, of a third Nakba, warning them of another ethnic cleansing. They’re well aware of what their strategies are under these justifications of “well there was an attack.” You had an incident in Hebron happen in ’94, when an Israeli settle went into the Ibrahimi mosque and shot Palestinians, killing tens of Palestinians. And at the end, what happened now is Israel was able to take over a large portion of Hebron. You have an entire street, Shuhada Street, which was once a vibrant market, that is now closed. So it’s not just metal detectors. It has nothing to do with security, more than it does with trying to asphyxiate Palestinians very, very slowly.

AARON MATE: You mentioned that Israeli minister warning of another Nakba, so just to explain to people what that means, a Nakba is the term Palestinians use to describe 1948, when some 700,000 Palestinians were forced to flee from their homes during the war that led to Israel’s independence. And this minister, [inaudible 00:04:19] whose cabinet the regional cooperation minister, Tzachi Hanegbi, he wrote, “Remember 1948, remember 1967, this is how a Nakba begins.” So Mariam, can you talk more about what Palestinians have been saying in terms of the incitement that they’ve gotten from Israelis like this minister? There also has been some opposition to, but not very much attention paid, to the fact that you’ve had right wing Israelis touring the holy Al Aqsa site under armed protection.

MARIAM BARGHOUTI: Right, I mean, look. This is nothing new. If you ask the Palestinians, they will tell you, well it might seem unusual or as if it’s breaking news to the international community, but for us, this is daily life. This is what it’s been like for decades, with complete silence. And Israel continues with impunity. So what’s happening right now is we’ve reached a breaking point, and if you follow up on Palestinian politics, you realize that every moment Palestinians rise, it’s usually more intense than the other. Because you can strangle people for so long before they start trying to fight back. They’re reiterating the right to exist. That’s what’s happening here. And I think that’s the very, very important message, is that there has been this ethnic cleansing, this fight over a narrative. The Zionist movement started with the myth of a land for people without a land, and you have Palestinians saying that’s not true at all, and we are enduring this heavy oppression. We have Gaza that just entered 10 years of siege. That’s 10 years. It’s unfathomable. You have the West Bank that’s been divided by 530 more checkpoints. You have Palestinians with Israeli citizenship that are treated as second and third class citizens. And you have 50%, half of the Palestinian population, in the diaspora.

AARON MATE: Mariam, it’s just amazing, after so many years watching this conflict and seeing on the Israeli side of the narrative, or at least the pro-Israeli side of the narrative, denying things like the Nakba. And now you have a minister openly threatening to impose another one. It’s just amazing to watch the discourse shift in that direction. Your thoughts on that?

MARIAM BARGHOUTI: I mean, look, the Israeli narrative towards Palestinians has always been very, very clear. It’s been one of domination and supremacy, one of “we’re going to take over your lives” and you see it with the night raids in villages, the way soldiers speak to Palestinians, it’s with this arrogance. And very, very heavy supremacy. It’s the language to the international community that’s always baffling, and how the international community constantly buys these narratives that Israel is working for its security, completely contextualization, that Israel was built through colonizing Palestinian lands, and then it continues to reinforce its state with an occupation that’s entering its fiftieth year this year. So it’s … The narrative isn’t really new, it’s more how people are taking it without doing further research, without trying to understand the Palestinian narrative.

AARON MATE: And in terms of what Palestinians have been doing over the past week, so much attention was paid to the violence that’s happened this weekend. As I said, four Palestinians being shot dead, there also were three Israeli settlers killed in a stabbing attack by a Palestinian inside a West Bank settlement. But a lot of people missed this unprecedented boycott of the Al Aqsa compound with thousands of people praying in the streets. Can you talk about this civil disobedience campaign that’s been going on for over a week now?

MARIAM BARGHOUTI: Right. And it’s very important, because you’re constantly asking Palestinians, you should be non-violent. The international community is constantly prodding us to have this “Palestinian Gandhi” and right now you have these mass protests of unarmed civilians in Jerusalem that are trying and shouting for their right to move with ease to a place of worship. And that is very important to understand, that they’re going to pray, and they’re still being stopped and impeded and obstacles are placed before them. And suddenly there is no real support for Palestinians, despite being suppressed violently, despite having a settler shoot a Palestinian protester who later died that day. It’s mass civil disobedience, completely non-violent, and still, no one’s really speaking about it. So that leaves Palestinians completely alone, searching for other alternatives to try and liberate themselves, to try and find whatever this place has left to afford of dignity.

AARON MATE: And Mariam, in response to the Israeli crackdown, the Palestinian Authority president Mahmoud Abbas has said he’s suspending security cooperation with Israel. He’s made similar statements before. Is there any belief that that will actually amount to anything?

MARIAM BARGHOUTI: I mean, on the ground, there’s complete disenchantment with the Palestinian Authority. For the past two decades, it has been nothing but complicit with the Israeli occupation, especially through security coordination, where they’re basically turning in Palestinians to Israel. And it’s a one way street. Palestinian authority hasn’t benefited from Israeli intel at all. So even if Mahmoud Abbas does give a speech, we need to remember how he completely forfeited the Palestinian call when a hunger strike was going on, one of the largest hunger strikes in Palestinian history, and instead was cajoling to the Trump administration. You have to keep in mind that this same Palestinian Authority that’s claimed to stand with Palestinians in Jerusalem is also helping Israel asphyxiate Gaza very slowly. So it’s taking whatever the PA has to say with a grain of salt, really. It’s more of an avoiding this eruption to be directed towards the PA, while it’s very much complicit with the Israeli occupation.

AARON MATE: Mariam, finally, what are some of the short term solutions that are being proposed to this standoff over the Al Aqsa compound? And even if they’re resolved, do you think that the anger that’s been unleashed by this week of violence and restrictions on the compound is gonna subside, given the reality of the everyday occupation?

MARIAM BARGHOUTI: If Palestinian demands of removing these metal detectors, as if it’s an airport and not a residential area, then there is a possibility of moving forward. But as long as Israel keeps escalating and that is exactly what it’s doing, it’s trying to provoke Palestinians even further, then I don’t see any way the situation to kind of de-escalate. On the contrary, I see it as further entering an uprising from the Palestinian end.