Palestinian Suffers Fractures After Israeli Colonists Assault Him Near Nablus 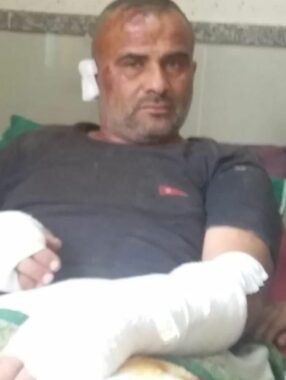 A Palestinian man was injured, on Sunday at night, after several illegal Israeli colonists attacked him in the as-Sawiya village, south of the northern West Bank city of Nablus.

Ghassan Daghlas, a Palestinian official who monitors Israel’s illegal colonialist activities in northern West Bank, said the colonists suffered fractures in his arms, cuts, and bruises to the face and other parts of his body, when the colonists assaulted him on his own land, in the eastern part of the village.

Daghlas added that the colonists hurled stones at the Palestinian, identified as Jihad Fuad Hijazi, 48, and assaulted him, while he and his wife were in their own olive orchard near the illegal Aliya colony.

Palestinian medics were called to the scene and rushed the wounded man to a hospital in Nablus city.

In related news, a group of illegal Israeli colonists broke into an agricultural hothouse in the village and stole dozens of seedlings.