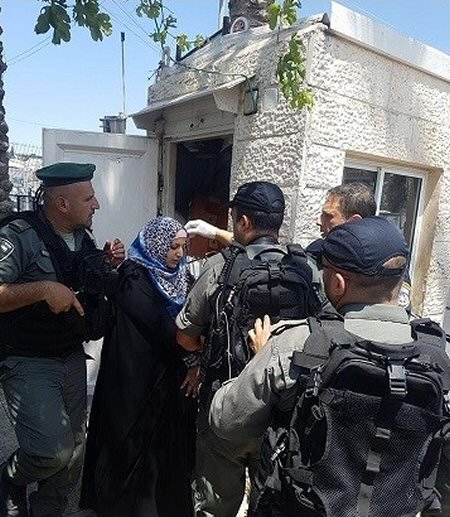 Israeli forces detained a Palestinian woman outside the Old City in occupied East Jerusalem, on Saturday, for reportedly carrying out a stabbing attack that lightly injured a Palestinian resident of Jerusalem.

Israeli police spokesperson Luba al-Samri had initially said, in a statement, that a Palestinian woman approached a “civilian security guard” while holding a knife in her hand on Sultan Suleiman Street, across from Damascus Gate, and stabbed an Israeli guard in the shoulder, lightly injuring him.

However, al-Samri said, later in the day, following the release of security camera footage, that the woman had initially attempted to stab an Ultra-Orthodox Jewish Israeli who ran away. The woman then reportedly stabbed the Palestinian Jerusalemite in the hand.

Israeli border forces then “quickly controlled, neutralized, and detained her,” al-Samri said. The woman was then transferred for interrogations with Israeli authorities, she added.

Witnesses confirmed that a Palestinian woman was detained near Damascus Gate. The woman had a knife in her hand and had stabbed someone in the area, witnesses told Ma’an News Agency.

Witnesses added that the woman was immediately detained by Israeli forces, who then closed down the area where the incident took place.

Locals later identified the woman as Fadwa Nazih Kamil Rabayaa, whereas Israeli police spokesman Micky Rosenfeld said she was a 29-year-old resident of the East Jerusalem neighborhood of Sur Bahir.

Following the stabbing, Israeli police forces stormed Rabayaa’s home in Sur Bahir, al-Samri said, where they seized a computer and other personal belongings.

According to documentation, 53 Palestinians have been killed by Israelis since the beginning of the year during actual or alleged attacks, while at least 18 of these Palestinians were killed during clashes with Israeli forces or during violent Israeli raids in the occupied West Bank.

Since the beginning of 2017, 13 Israelis have been killed by Palestinians, nine of whom were uniformed Israeli officers and at least three were Israeli settlers residing in occupied Palestinian territory in violation of international law.

Palestinians have often cited the daily frustrations and routine Israeli military violence imposed by Israel’s nearly half century occupation of the Palestinian territory as main drivers for political attacks on Israelis.