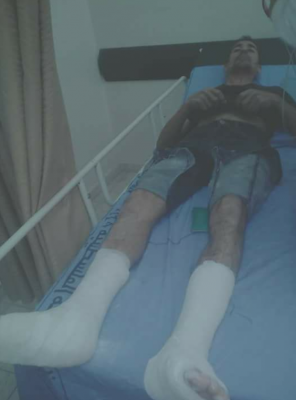 On Saturday, a Palestinian worker from Bethlehem governorate, in the occupied West Bank, suffered fractures in both his legs, in addition to various cuts and bruises, after falling from a high altitude when Israeli soldiers chased him while he was trying to enter occupied East Jerusalem, where he works.

Salah added that the worker fell from a high altitude while the soldiers were chasing him, leading to fractures in his legs, in addition to cuts and bruises to various parts of his body.

The soldiers did not abduct the worker after he was injured and left the scene, while locals called for a Palestinian ambulance which rushed to the area, and transferred him to Beit Jala governmental hospital, in Bethlehem.

In related news, the soldiers invaded Beit Rima town, northwest of Ramallah in central West Bank, and fired many gas bombs, during clashes that erupted during the invasion, causing many Palestinians to suffer the severe effects of teargas inhalation.

On Saturday evening, the soldiers abducted a former political prisoner, from Jenin refugee camp, in the northern West Bank governorate of Jenin, after stopping him at a sudden military roadblock.