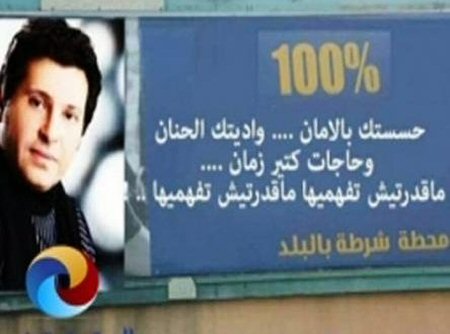 Egyptian singer Hani Shaker has filed a complaint to the Egyptian Public Prosecutor, against the Israeli Embassy in Cairo, after Israel Police used his picture and a clip of one of his songs in its campaign to recruit Israeli-Arab residents.

Speaking to Quds Press, Shaker said that he was “surprised” by the campaign, adding that he immediately asked his lawyer in order to file a complaint against the Israeli Embassy in Cairo.

He reiterated his opposition to the use of his art in the recruitment campaign by the Israeli police.

He said, according to the PNN: “This is theft of Arab art, and an Israeli assault on it,” he said. “It is a despicable attempt to falsify the Arab consciousness.”

The 55-year-old singer added, “This damages the reputation of Egyptian artists who support the Palestinians and their rights, including the rejection of all forms of normalisation with Israel and which call for return rights to their owners.”

Israeli police recently launched a campaign to encourage Arab-Israelis to join the force. Shaker’s music was included in the advert.

His lawyer told Quds Press that he has started the procedure of filing a complaint against Israel, stressing that Shaker opposes normalizing ties with Israel.

The lawyer accused the Israeli police of trying to reach the hearts of the Arab residents in Israel through their love for Shaker.