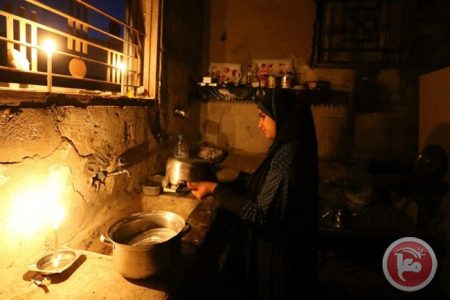 The ongoing electricity crisis in the Gaza Strip deepened on Saturday, after fuel purchased from Egypt was reduced by between 33 and 50 percent, with Gaza’s power authority claiming the Palestinian Authority (PA) froze all bank transfers, to Egypt, that were paying for fuel used to operate the besieged coastal enclave’s sole power plant.

Additionally, Egyptian power lines, which typically provide up to 28 megawatts of electricity to Gaza’s southern districts, were also damaged and have, thus, ceased to provide any power, according to a statement from the Gaza Electricity Distribution Corporation.

The developments came amid reports that the Ramallah-based PA has been moving to block the growing alliance between Gaza’s de facto leaders Hamas and Egypt, particularly since fuel deliveries from Egypt that arrived in late June served to avert a full humanitarian collapse in Gaza, after Israel drastically reduced its fuel supplies at the request of the PA.

Ma’an further reports that, according to the Hamas-run electricity company, as of Saturday, the total power supply available to the small Palestinian territory dropped to just 93 megawatts — 70 megawatts of which were being provided from Israel (compared to the 120 megawatts provided before the current crisis), and 23 from Gaza’s sole power plant, which, as a result of the stymied Egyptian fuel deliveries and bank transfers, was operating just one generator out of three.

The 93 megawatts compares to the 125 to 170 megawatts that have been provided over the past two weeks, following the provision of Egyptian fuel, the 208 that was provided before Israel slashed its supplies — all a small fraction of the estimated 500 megawatt demand for Gaza’s electricity needs.

The power plant was completely out of commission between mid-April and late June following a dispute between the PA and Hamas, after Gaza’s electricity officials said they could not afford a PA-imposed tax on diesel that doubled the price of operating the plant.

Once the plant resumed partial operation from the fuel purchased from Egypt, between two to three of the turbines began operating, producing between 45 to 70 megawatts — compared to as much as 60 megawatts that were produced in past years from fuel arriving from Israel.

Gaza’s power authority claimed that two of the plant’s generators shut down because the Palestinian Monetary Authority in Ramallah suspended all money transfers from Palestinian banks to Egypt.

As a result, the statement said, the Egyptian providers had stopped delivering fuel to Gaza on Thursday, prompting the power plant to shut down two generators.

The Hamas-run power authority said it was working out “alternative ways to transfer the money for the fuel to Egypt to resume supplies to Gaza.”

The PA has been the center of widespread condemnation, in recent weeks, for its policies in Gaza aimed at putting pressure on Hamas to relinquish control of the besieged coastal enclave and hand over the territory to the PA.

Gaza, which marked its 10th year under an Israeli-enforced blockade last month, has struggled for years with power shortages due to limited fuel access and degraded infrastructure.

Egypt, which borders Gaza in the south, has also upheld the blockade following President Abdel-Fattah al-Sisi’s overthrow of the Muslim Brotherhood-led government in 2013, subsequently closing the Rafah crossing to Palestinians.