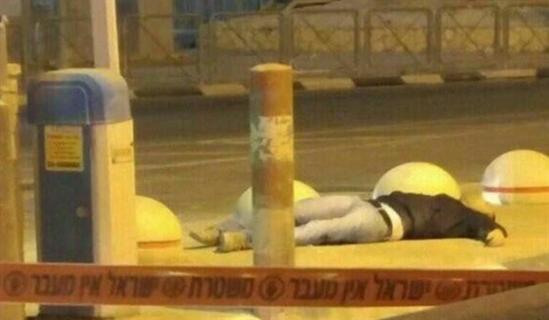 Hours after Israeli soldiers killed a Palestinian teen in Bethlehem, the army shot and killed, on Tuesday evening, a Palestinian man at a military roadblock, west of Tulkarem, in the northern part of the occupied West Bank.

Palestinian medical sources said the man has been identified as Nidal Daoud Mahdawi, 44, from Shweika area, north of Tulkarem.
The Israeli army claimed that the Palestinian was trying to cross roadblock #104, and that he “attempted to stab the soldiers, before they shot him.” There have been no reports of injuries among the soldiers.

A video of the incident shows the man standing still behind a pole, when a soldier fired a round near him; Mahdawi started walking towards the soldiers who fired several other rounds, and then he started running towards them before they fired the fatal shots.

Also on Tuesday, the soldiers killed a Palestinian teen, identified as Qussai al-‘Amour, 17, in Teqoua’ town, southeast of Bethlehem.

A video captured by Hisham Abu Shaqra, a Palestinian journalist who works for the Turkish Anadolu News Agency, showed the soldiers dragging the severely wounded teen across the ground, banging his head and pulling at his limbs and torso, and he died from his wounds just minutes later.

It is worth mentioning that, nearly a year ago, the Journalist was shot by Israeli soldiers with a Tutu expanding bullet, north of Bethlehem.

Abu Shaqra was also abducted by the soldiers, on Friday March 18, 2016, after they shot and killed Mahmoud Ahmad Fannoun, 21, from the southern West Bank city of Hebron.

A Palestinian man was shoot and killed by Israeli troops on Tuesday evening at an Israeli military roadblock near the northern West Bank city of Tulkarem.

Local sources said that Nidal Daoud Mahdawi, 44, was shot and killed at a military road block known to locals as checkpoint 104 near Tulkarem. The Israeli army claimed that Mahdawi ran towards the soldiers holding a knife in his hand and that troops opened fire at him killing him.

Palestinian witnesses told local media that Mahdawi was walking to cross the checkpoint when they heard gunfire and then saw Mahdawi hit the ground.

Mahdawi lives in the city of Tulkarem and married to a Palestinian woman with an Israeli citizenship and is a father to five children.

Israeli troops closed the checkpoint after the incident and did not allow Palestinians to move in the area, local sources reported.