Israeli Troops Detain 14 Palestinians From The West Bank And Gaza 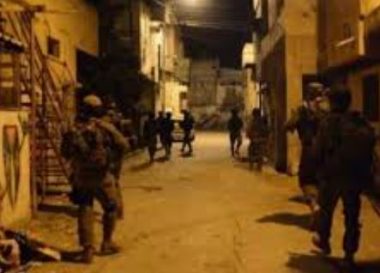 Palestinian sources announced that Israeli troops detained, on Tuesday at dawn, 13 Palestinian civilians during home searches in the West Bank, while one man was detained at Gaza border crossing.

The Palestinian Prisoners Society (PPS) said that nine Palestinian were abducted when Israeli troops invaded the Shu;fat refugee camp, in Jerusalem, and searched homes there.

Among those detained by the army were the widow of Ghassan Abu Jamal, who was killed in 2014 after carrying out an attacked that targeted a synagogue in Jerusalem, PPS reported.

Also on Tuesday, a Palestinian was detained by Israeli troops at the Erez border terminal, at Gaza border with Israel.

Omar Abu Assad, 25, was crossing with his mother because she needed medical care in a West Bank hospital.

Local sources said that Abu Assad was detained for several hours then was forced along with his mother by Israeli troops to go back to Gaza.