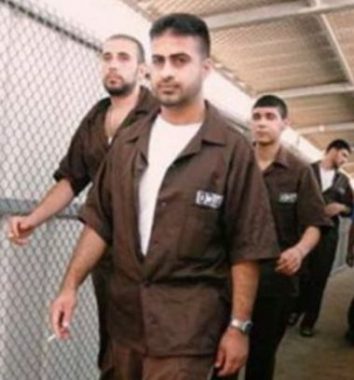 The Palestinian Prisoners’ Society (PPS) has reported that an ailing Palestinian detainee, who is held in solitary confinement in Asqalan Israeli prison, declared an open-ended hunger strike, demanding receiving the urgently-needed medical treatment.

The PPS said that Anas Ghaleb Jaradat, 36, from Sielet al-Harethiyya town west of the northern West Bank city of Jenin, suffers from a jaundice of the liver, but the Israeli Prison Authority is denying him the right to the needed specialized medical treatment.

Meqdad stated that the head of the Asqalan Prison told him that Meqdad was diagnosed with a kidney disease, but has been placed in solitary confinement for the past nine months, and has been denied family visits for more than two years.

Meqdad was abducted by the soldiers on May 11, 2003, and was sentenced to 35 life-terms and additional 35 years.

The family voiced an urgent appeal to human rights and legal groups, including the Red Cross, asking them to visit him and to intervene to ensure he receives the needed treatment, without violations, as stated by all international treaties.