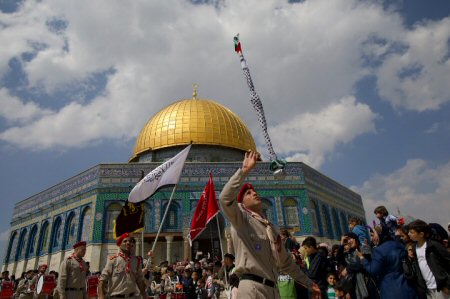 Tens of thousands of Palestinians observed Al-Isra Wal Miraj Muslim holiday, today, with worship at Al-Aqsa Mosque, in Jerusalem’s Old City, the site of this holy day, thus the religious significance of Jerusalem and specifically Al-Aqsa Mosque, to millions of Muslims worldwide, as scouts marched through the city streets playing all kinds of musical instruments.

Eleven scout bands with some 600 members marched through the streets of East Jerusalem and its Old City alleys as thousands of people gathered at Al-Aqsa Mosque to worship this important Muslim holiday.

The Islamic Waqf department, which is in charge of Muslim holy places in Jerusalem, said that over 50,000 worshippers have gathered at Al-Aqsa compound, for this occasion, where they heard the story of Al-Isra Wal Miraj miracle, or Prophet Mohammad’s one-night journey, or Isra, from Mecca to Jerusalem on a horse called Al-Buraq, which landed at the current location of Al-Aqsa Mosque, and his travel from this location to heaven, or Miraj, before returning to earth.

Al-Isra Wal Miraj is observed every year on the 27th day of the Islamic month of Rajab, almost one month before the start of the holy fast month of Ramadan. The date changes every year in the Gregorian calendar.