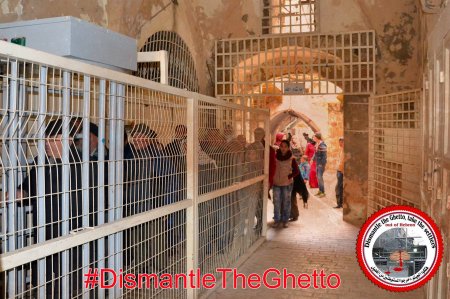 A newly formed organization the National Campaign to Lift the Closure in Hebron, marked the anniversary of the Ibrahimi Mosque Massacre with a campaign to #DismantleTheGhetto on February 25th.

This year’s commemoration coincides with Israel’s unprecedented escalation in seizing Palestinian land in the West Bank for Settlement expansion. This has been accompanied with plans articulated by Israeli ministers to construct settlements and annex most of so-called ‘Area C’ into the state of Israel. ‘Area C’ was established in 1993 as part of the Oslo Accords, and designated as an area to be temporarily under Israeli control. It was supposed to pass into Palestinian control within five years of that agreement, but that never happened.

The Campaign also noted that this year’s commemoration coincides with Israel’s increasing campaigns to Judaize the Naqab, similar to what has happened in Um Al-Hiran recently, with a general rise in the policy of demolishing Palestinian houses whether in the occupied territories or within the Green Line.

The campaign launched an effort to #DismantleTheGhetto to take the settlers out of of Hebron, in order to honor the victims of the 1994 attack.

The Ibrahimi Mosque Massacre took place on February 25th, 1994, when the American doctor and right-wing extremist orthodox Jew Baruch Goldstein entered the mosque and began firing his automatic weapon at the worshipers who were praying inside, gunning down men, woman and children alike. He managed to kill 29 people before he was killed by some of the worshipers who disarmed and killed him.

Following the Ibrahimi Mosque massacre in 1994, the Israeli Occupation Authorities closed the Mosque for six months. Palestinians were punished by an imposed 40-day curfew and movement restrictions within the City.

The Occupation also divided the Mosque into two parts whereby one part was converted into a synagogue. The Israeli government also increased settlement expansion within the heart of the City which further restricted the presence of Palestinians there, turning the city center into a ghost town.

The National Campaign to Lift the Closure in Hebron issued a statement on the occasion of this anniversary pointing out that, “The Israeli escalation continues in the heart of Hebron until the present day.

The Israeli military authorities also continue to kill Palestinians at checkpoints and in restricted areas in Hebron. As of today, the number of those killed by the Israelis since October of 2015 around the closed area has risen to 22 people. The Israeli occupation’s practices against Palestinians amount to the level of ethnic cleansing, given the increasing checkpoints, restriction of movement, and the numbering system implemented to enter the closed areas in the Old City. This system is similar to the Ghetto system that the Jews themselves suffered from in Europe during WWII.”

Their statement continues, “In light of the bleak reality, and given our belief that the best way to end the occupation and its discriminatory policies is by resisting it, the national parties, popular committees and civil society organizations in Hebron announce the launch of the ‘National Campaign to End the Closure of Hebron’ through a series of different events. In commemoration of the Ibrahimi Mosque massacre we call on our supporters and allies in the struggle, as well as members of our community, to participate in the campaign events, rejecting the Occupation’s practices in the City, and to demand the dismantling of checkpoints and barriers in the City, as well as the removal of settlers in Hebron.”

“These events will happen as part of the larger struggle to resist the Judaization policies within the Green Line and in an effort to bring greater awareness of the increasing campaigns from our friends and allies around the world that demand the dismantling of the Ghetto and removal of restrictions so that Palestinian citizens have freedom of movement inside Hebron. These events will also happen as part of the larger Boycott, Divestment and Sanctions movement (BDS).”

“Our campaign is based on principles and rights sustained in international humanitarian law and the United Nations’ resolutions that consider Israeli Settlements and collective punishment as forms of war crimes. As such, UN Security Council decision 2334 calls on the Israeli government to stop all forms of Settlement activities in Occupied Palestinian territories, including East Jerusalem.”

“Let the struggle to lift the restrictions and the removal of settlers in the Heart of Hebron continue.

–The National Campaign to Lift the Closure of Hebron: ‘Dismantle the Ghetto’.”