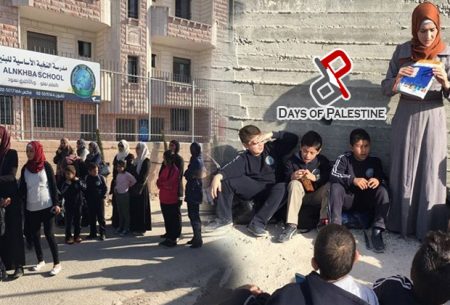 After the Israeli occupation had shut down their school, Palestinian students in East Jerusalem attended class in the street, on Sunday.

The authorities claimed that the school syllabus incites against them and Jews -a claim the school completely denies.

The students and their teachers said that they had attended this class as a form of a protest against the Israeli closure of their school.

Headmaster of the School Luay Bkirat, who was investigated by the Israeli occupation, denied the claims that his school incites against the Israeli authorities and Jews.

“Our school teaches the Palestinian curriculum being taught at all schools in Jerusalem and that no one of the Palestinian teachers at these schools had ever been investigated over incitement allegations,” he said.

Bkirat condemned the decision and said that he would “conduct procedures to stop this decision which aims to destroy education.”

Israeli newspaper Times of Israel reported that the school was shut down for being a “Hamas front,” after a months-long joint probe by the Israeli education ministry, Israeli Jerusalem police and Israeli intelligence, the Shin Bet.

Palestinian children in Jerusalem, according to Days of Palestine, suffer from routine Israeli interference and political pressure to replace Palestinian curricula with an Israeli one in occupied East Jerusalem, where full Israeli military and civil control deprives students from proper and secure educational services.

A 2016 report by Israeli daily Haaretz said that Palestinian schools in occupied East Jerusalem received less than half the funds that the Jerusalem municipality transferred to Jewish schools in West Jerusalem.

In 2011, the Applied Research Institute – Jerusalem  reported that, due to the lack of some levels of education in Sur Bahir, dozens of Palestinian students are being forced to attend schools in neighboring villages.