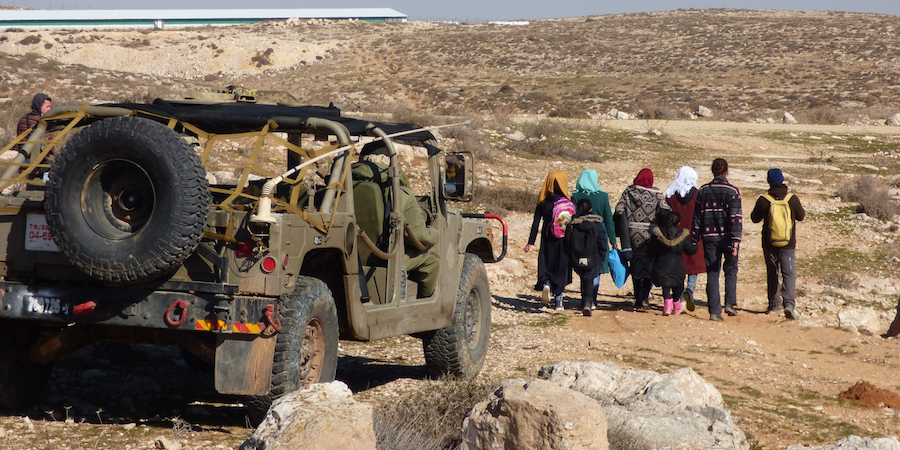 The Israeli army commits the vast majority of violations of Palestinian rights as a part of its administration of the illegal military occupation. Checkpoints, house and aid structure demolitions, stop-work orders, and physical violence – all of which occur in the context of ongoing, sweeping land and resource confiscation – continue to pose systemic challenges to Palestinian life in the South Hebron Hills.

Specifically distressing actions by the Israeli military last month, according to Operation Dove, include the destruction of an agricultural road linking Bani Na’im and Yatta. Israeli authorities also turned a blind eye to settlement expansion and its consequences: on January 1st the Israeli settlement Karmel began use of a new sewer pipe and it is now poisoning Palestinian farmland in Umm al-Kheir.

Israeli civilians pose another danger to Palestinian life in the South Hebron Hills. As their presence in occupied territory attests, the settlers, along with the Israeli government, aim to facilitate population transfer. This shared mission creates a dynamic whereby settlers frequently galvanize the Israeli army to commit, or commit themselves, acts of violence against Palestinians.

Accountability for Palestinian victims of Israeli attacks is largely out of reach. According to the Israeli organization Yesh Din, a police complaint filed by a Palestinian in the West Bank has a mere 1.9 percent of being effectively investigated.

Operation Dove reports that 10 instances of settler harassment and aggression and one settler attack took place in January in the South Hebron Hills. The majority of the incidents occur in the presence of or against Palestinian children.

For a time that month, Israeli forces and settlers instituted collective punishment against Palestinian children in the South Hebron Hills in response to a car-ramming attack in Jerusalem that targeted Israeli soldiers.

“In particular, school children from the villages of Tuba and Maghaiyr Al Abeed, who make the daily trip to and from school past the illegal Israeli outpost of Havat Ma’on with an Israeli military escort, were subjected to increased risk of settler violence and also missed portions of their school days due to the absence and lateness of the military escort.”

Israeli authorities claimed the absence of the military escorts was a consequence of “increased military operations, trainings and checkpoints.”

Operation Dove volunteers accompany Palestinian children in the South Hebron Hills to at-Tuwani, where they attend school. The threat of settler violence is so great in the area that the Israeli military provides the children with soldier escorts, but even when these escorts show up as planned, they often fail to adequately protect the children.