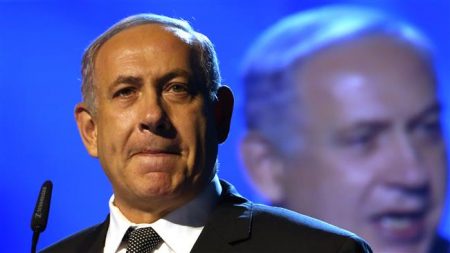 Israeli Prime Minister Benjamin Netanyahu has called for deployment of international forces in the Gaza Strip, expressing his concern of the International Criminal Court (ICC), in the Hague.

Netanyahu said, in his meeting with Australian foreign minister Jolie Bishop, on Sunday morning, that Israeli forces must impose its control over the West Bank while the Palestinian Authority’s power should be limited. He added, according to Al Ray Palestinian Media Agency, that Israel “must seek other security alternatives through deploying international forces in the Gaza Strip.

He explained that Israel has dealt with such an experience, after the Israeli withdrawal from south Lebanon, in 2000.

The Israeli PM suggested the possibility of re-experiencing this model in Gaza, where International forces can dominate the Gaza Strip and face “terrorist” issues, as he asserted.

This is considered to be the first time Netanyahu has presented this idea publically; Israeli channel 2 explained that it was not clear on the seriousness of this suggestion.

Netanyahu demanded prevention of the ICC from exerting pressure on Israel, through presenting its military and political leadership to the court and accusing them of committing war crimes. He also suggested that Australia might affect other countries to practice pressure on the ICC not to prosecute Israeli leaders.