Youth Against Settlements: Munther Amira Awarded ‘Personality of the Year’ for Popular Struggle 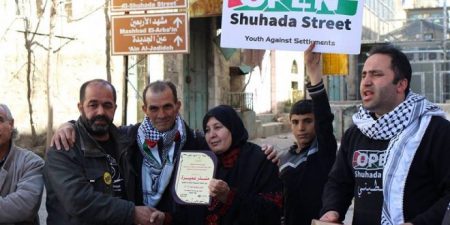 The Youth Against Settlements movement announced, on Saturday, that Popular Struggle Coordination Committee (PSCC), activist Munther Amira received the Personality of the Year award for 2016.

Mu nther was honored in recognition to his commitment to the popular struggle and his activism in enhancing the idea, both on a local and international level, according to the PNN

Amira was honored in a ceremony held by the YAS movement at the entrance of Shuhada Street in Tel Rumeida, in the Old City district of Hebron, which Israeli settlers have taken over and Israeli authorities refused to open.

The ceremony was attended by the residents of the old city , members and founder of YAS, Issa Amr, head of the Independent Commission for Human Rights in the southern West Bank, lawyer Farid al-Atrash, Popular action leader, Yousef Sharqawi , in addition to a group of Palestinian and international activists and journalists.

YAS praise the work of Amira in the Old City, including the ongoing campaigns to protect the rights of the people, which are continually violated under the attacks carried out by settlers and occupation forces, saying that Amira is still on top of his work despite wide attacks by the Zionist lobby in the world, due to spreading the spirit of popular resistance and supporting the Boycott, Divest, Sanction (BDS) movement, in addition to exposing Israel’s racist apartheid practices.

For his part, founder of YAS, Eng. Issa Amr, said that this titles is given every year in honor of the active support of popular resistance. The title, in previous years, was given to personalities including Governor of Hebron Kamel Hamid, human rights activist Farid Atrash, Luisa Morgantini and Akram Natsheh, as an appreciation and encouragement to their efforts and work in promoting the ideology of popular resistance in the face of the occupation.

In response, activist Amira thanked YAS and all the institutions, national factions and the governorate of Hebron, who work to promote the Popular Resistance approach and promote life in Shuhada Street and the Old City, which were subjected to the worst forms of Judaization, stressing that all efforts need to be unified to resist the occupation and achieve victory on the ground.

Amira also pointed out the necessity of activating Popular resistance amongst the Palestinian people, since Israel is leading an international campaign against popular resistance and BDS campaigns, which were capable of exposing Israeli violations of human rights in Palestine.