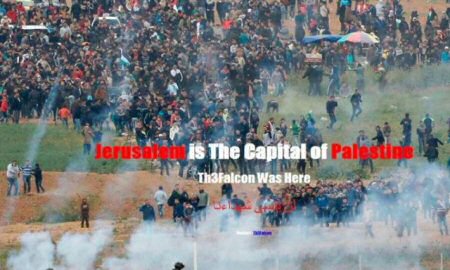 A group of Palestinian hackers were able to hack a number of Hebrew sites simultaneously, and post on the main pages pictures taken during the attack on the peaceful Great Return March, this past Friday.

Ynet reported, according to Al Ray, that the hackers were able to hack a number of local council sites, including the towns of Kfar Saba, Herzliya, Eilat and Acre.
Hacker posted pictures of Israeli attacks against Palestinian protesters along Gaza’s border last Friday, entitled with “we do not forget martyrs; Jerusalem is the capital of Palestine.”
The number of citizens killed during the peaceful Great Return March has been raised to 19, with about 1,477 injuries.
04/03/18 US Blocks UN Investigation into Israeli Military Killings in Gaza (pt. 1/2)