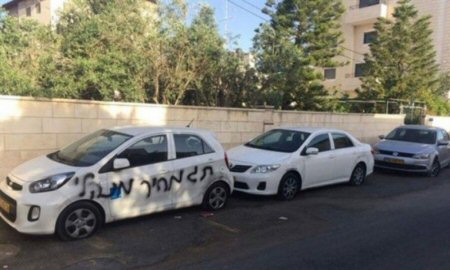 Extremist Israeli settlers from the illegal Havat Gilad settlement outpost, in the northern occupied West Bank district of Qalqiliia, raided the Palestinian town of Faraata on Wednesday, where they spray-painted racist graffiti and punctured car tires.

Ultra-nationalist Israeli settlers from Havat Gilad raided the town before dawn on Wednesday and punctured the tires of five cars belonging to Palestinian residents of Faraata.

The settlers also sprayed racist, anti-Arab graffiti on cars and the walls of homes in the area.

Local activist Murad Ishteiwi told Ma’an News Agency: “This assault comes under the frantic campaign of assaults carried out by Israeli settlers across several villages that are near settlements, under cover and security by Israeli forces.”

Better known as “price tag” attacks, extremist Israeli settlers use violent acts of retribution on Palestinians and their property to demonstrate their opposition to Israeli restrictions on settlements and their outposts in the occupied West Bank.

In March 2017, Israeli NGO Yesh Din revealed that Israeli authorities served indictments in only 8.2 percent of cases of Israeli settlers committing anti-Palestinian crimes in the occupied West Bank in the past three years.