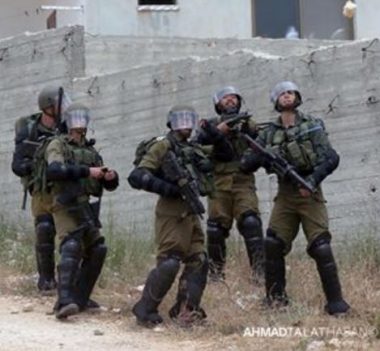 Dozens of residents held, Friday, the weekly nonviolent protest in Kufur Qaddoum town, east of the northern West Bank city of Qalqilia, demanding the Israeli army to open its main road that was blocked more than fourteen years ago.

Morad Eshteiwy, the media coordinator of the Popular Committee in Kufur Qaddoum, said the residents marched from the center of the village, chanting against the ongoing Israeli occupation and violations.

He added that, unlike previous weeks, the soldiers did not invade the town, therefore, there were no clashes or injuries.

Eshteiwy stated that the popular, nonviolent resistance, is one of the most effective weapons in the ongoing conflict, and the continuing struggle against the illegal Israeli occupation.

The residents of Kufur Qaddoum hold their protests every Friday, following noon prayers at the local mosque, and are accompanied by many international and Israeli activists.

It is worth mentioning that the army closed the town’s main road, more than fourteen years ago, to provide easy access to the Israeli colonists driving to and from the Kedumim illegal colony, that was built on privately-owned Palestinian lands.

Two days ago, the soldiers kidnapped Rafe’ Mohammad Hussein, 17, and Mohammad Nidal, 20, from Kufur Qaddoum, as they and their families were heading to pick their olive trees in the families’ orchards.

The two were stopped at the main gate that was installed on the towns’ eastern road, where the soldiers detained them for several hours, and later took them to an unknown destination.