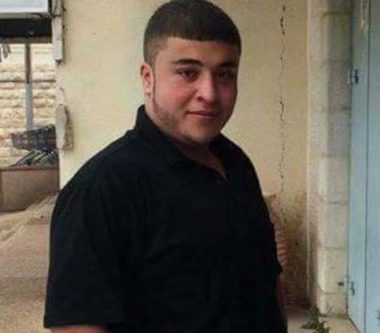 Israeli soldiers shot and seriously wounded, on Saturday at dawn, a young Palestinian man, near Ein Yabroud town, east of the central West Bank city of Ramallah, after he reportedly attempted to “ram Israeli soldiers with his car, then tried to stab them.”

The Israeli army claims that the soldiers shot and injured the young man, identified as Ahmad Ayman Hamed, 21, after he “tried to run over them” near a military base, close to Ofra illegal colony.

It added that the soldiers fired at the vehicle Ahmad’s vehicle, forcing him to stop, and that he allegedly stepped out of his car and “tried to stab a soldier, before he was shot and injured.”

An Israeli ambulance was called to the scene and moved Ahmad to a hospital for treatment.

Palestinian eyewitnesses said while the young man was driving his car, he was surprised to see a group of soldiers in his way on the main road, before the army opened fire and seriously wounded him.

They added that the wounded young man was shot with three live round in his abdomen, and was left bleeding, without any first aid, until the Israeli ambulance arrived and took him away.

Following the shooting, the soldiers invaded Ahmad’s home, and interrogated his family while searching their property.

Many Palestinians have been shot dead by the soldiers since last year under similar allegations of attempting to ram soldiers with their car.

Last September, the soldiers shot and killed a young Palestinian man, identified as Mustafa Nimir, 25, after alleging he attempted to ram them with his car, but later admitted that the man was not even the driver of the vehicle, to blame his brother-in-law for “driving erratically”

Mustafa Nimir, 25, was returning home along with his brother-in-law Ali after the two had gone shopping and purchased clothes for Ali’s six-year-old daughter, and baked goods for the family.