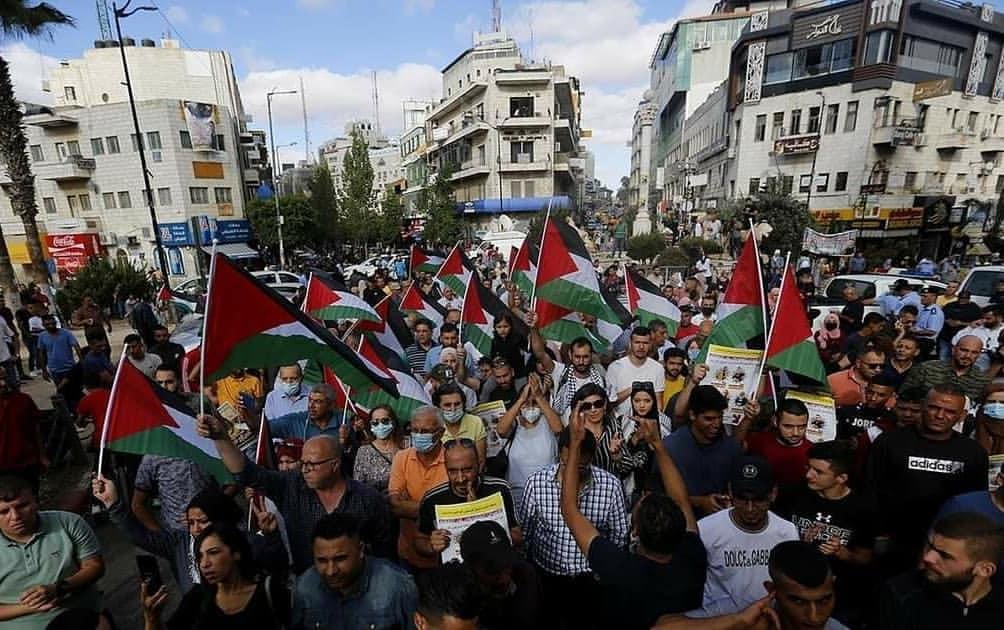 Following Friday’s capture of four of the six prisoners who escaped from the Gilboa Israeli prison last week, Palestinians throughout the West Bank held marches and rallies in solidarity with the prisoners, who they term ‘freedom fighters’ for the cause of Palestinian liberation.

Outside of Gilboa Prison, dozens of supporters gathered with bullhorns and noisemakers, hoping to be heard by the prisoners as they were transferred. They chanted in support of the Palestinian prisoners.

Hundreds of Palestinians marched through the streets of Ramallah on Saturday evening, chanting slogans in support of the heroism of the six prisoners who managed to escape through a tunnel that they dug with spoons.

Qaddura Faris, the head of the Palestinian Prisoner’s Society (PPS), spoke at the rally, noting that Israeli authorities are now cracking down on all Palestinian prisoners, and that the prisoners are extremely vulnerable right now. He called on Palestinians to continue to engage in protest to pressure Israel to end its crackdown on the prisoners.

The head of the High Commission for Prisoner Affairs, Amin Shoman, also addressed the protesters. He called on all human rights institutions to monitor the conditions of the prisoners who were recaptured last night, and held Israel fully responsible for their lives.

As of Saturday evening, the four captured prisoners have not had access to lawyers, and have been isolated and subjected to so-called ‘harsh interrogation techniques’ used by Israeli authorities to torture Palestinian prisoners.

Also in the Ramallah District, at the entrance to the town of al-Bireh, Palestinians taking part in a peaceful protest in support of the prisoners were attacked by Israeli soldiers with rubber-coated steel bullets and tear gas.

Also Saturday, Israeli forces attacked dozens of Palestinian demonstrators who gathered at the northern entrance to the city of Bethlehem, which is a Christian holy city and home to tens of thousands of Palestinian Christians.

The soldiers reportedly fired teargas canisters and stun grenades to disperse the protesters. No injuries were reported.

In the northern West Bank, at least eight Palestinians sustained injuries by Israeli rubber-coated bullets during clashes with the Israeli forces at Huwwara Israeli military checkpoint, at the southern entrance to Nablus city. Another 15 were treated for tear gas inhalation.

In the southern West Bank, Israeli troops cracked down on protesters in at least two locations: Al-Arroub refugee camp and Bab al-Zawyeh in central Hebron.

According to the report, Israeli soldiers stationed at the military checkpoint at the entrance to al-Shuhada Street clashed with Palestinians, firing tear gas canisters and stun grenades toward the youth and commercial shops in the area, which forced the owners to close their shops. This comes after the Israeli authorities decided to ban Muslims from praying at the Ibrahimi Mosque in the southern West Bank city of Hebron, located near al-Shuhada Street.