Palestinians Prevent Soldiers From Uprooting Their Lands In Jerusalem 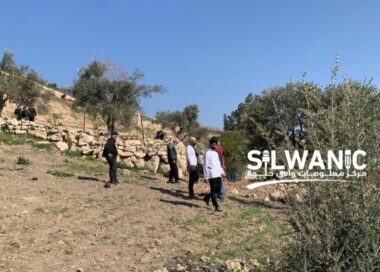 Israeli soldiers invaded large areas of Palestinian lands, and attempted to uproot them in Wadi ar-Rababa area in Silwan town, south of the Al-Aqsa Mosque in occupied Jerusalem before the locals managed to intercept and stop them.

Khaled Abu Tayeh, a member of the Silwan Land Defense Committee, stated that the soldiers and the police invaded the area, accompanied by bulldozers, and tried to bulldoze and uproot large swaths of privately-owned Palestinian agricultural lands.

Abu Tayeh added that the locals stood in front of the bulldozers, some even lying down in from of them, to protect their lands, their only source of livelihood.

The attack against the Palestinian lands is part of a larger Israeli colonialist plan aimed at building colonies and parks for the illegal Israeli colonists.