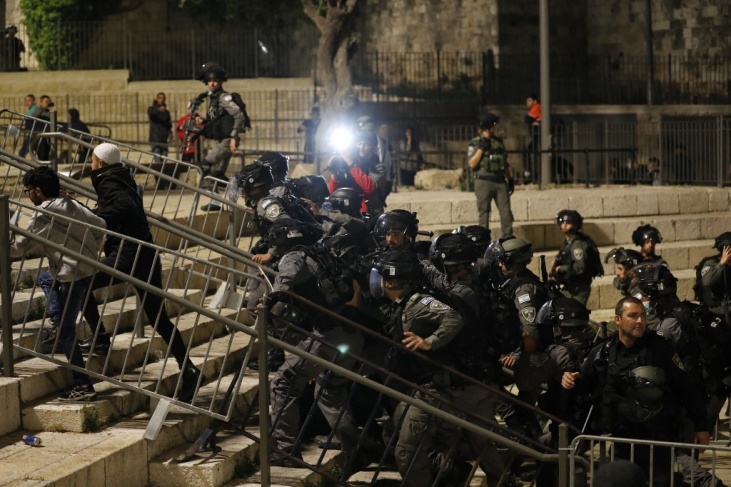 In a massive show of solidarity on Sunday, Palestinians from the West Bank and Jerusalem came together to remove barriers that had been placed by the Israeli police to block Muslim worshipers from accessing the al-Aqsa Mosque.

The mosque is considered the third-holiest site in Islam, and has been the site of numerous Israeli violations against the Palestinian Muslim worshipers attending prayer services there. These violations escalated with the beginning of the Muslim holy month of Ramadan two weeks ago.

Before the Palestinian worshipers removed the barricades on Sunday, a large group of right-wing Israeli settlers invaded the holy site, accompanied by Israeli soldiers who permitted the violation to take place.

According to the Islamic Waqf, which administers the al-Aqsa Mosque, 74 Israeli settlers stormed the Al-Aqsa courtyards and performed Talmudic rituals, while the occupation forces closed the Mughrabi Gate.

Following this violation of the Muslim holy site, hundreds of Palestinians took to the streets and removed barricades that had been placed by Israeli forces.

The Jerusalem Residency Committee issued a statement in support of the barricade removal, stating “Today, Jerusalem and its revolutionaries are celebrating a victory. We voice our support for this proud resistance to the Israeli occupation that takes away the rights of Palestinian Jerusalemites by force. We confirm that resistance is the best and most feasible way to extract our rights and to liberate our homeland.”

The actions on Sunday come following a week of violence aimed at the Palestinian population of Jerusalem, carried out by right-wing Israelis from the Lehava movement, who marched through the streets chanting “Death to Arabs” on Thursday.