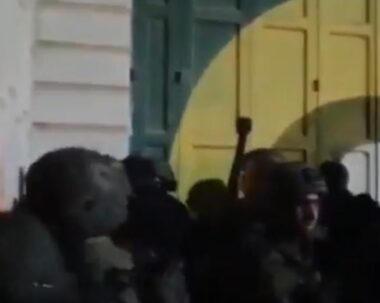 Israeli soldiers abducted, on Monday at dawn, two young Palestinian men, after an illegal colonialist settler attacked them, in the eastern part of Hebron city, in the southern part of the occupied West Bank.

Media sources in Hebron said an armed colonist from the illegal Keryat Arba’ colony, in the eastern part of Hebron, attacked the Palestinians near their homes, close to the colony.

They added that Israel soldiers, who were in the area at the time of the attack, abducted the two Palestinians, identified as Rasmi Tareq Jaber, 25, and Safwan Bassel Jaber, 20.

Both were near their homes in the Jaber neighborhood when the armed colonist assaulted them. After abducting them, the soldiers took them to a nearby military base.

In related news, the soldiers installed several roadblocks on Hebron’s northern and southern roads, in addition to the entrances of Sa’ir town, northeast of Hebron, Halhoul town, north of the city, and Yatta, south of Hebron, before stopping and searching dozens of cars, and interrogated many Palestinians while inspecting their ID cards.

Amer Awad, the secretary of Beit Hanina – Shu’fat Organizational Committee, said the undercover soldiers infiltrated into the town, and kidnapped the four young men during a nonviolent procession, protesting the escalating violations against the Palestinians in Bab al-‘Amoud and the areas surrounding the Al-Aqsa Mosque in occupied Jerusalem.

On Sunday at night, the soldiers abducted three Palestinians from Jerusalem and issued an order against another Palestinian preventing him from entering the Al-Aqsa Mosque for six months.

On Sunday evening, the soldiers invaded the al-‘Isawiya town, in Jerusalem, and closed many roads leading to protests.

The soldiers fired many gas bombs and concussion grenades, causing dozens of Palestinians to suffer the effects of tear gas inhalation.

The soldiers also invaded the al-‘Ezariya town, east of Jerusalem, and fired a barrage of gas bombs and concussion grenades at Palestinian protesters, causing many injuries.