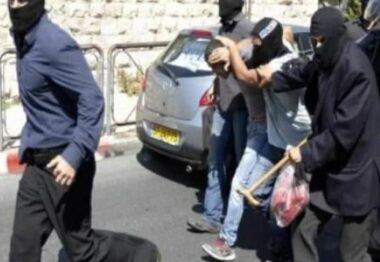 Amer Awad, the secretary of Beit Hanina – Shu’fat Organizational Committee, said the undercover soldiers infiltrated into the town, and kidnapped the four young men during a nonviolent procession, protesting the escalating violations against the Palestinians in Bab al-‘Amoud and the areas surrounding the Al-Aqsa Mosque in occupied Jerusalem.

Awad added that two of the kidnapped Palestinians have been identified as Mustafa Haimouni and Omar Atallah.

Bassel ‘Aabed, a member of the Regional Committee in Beit Hanina, said the Palestinians were kidnapped after regular army units invaded the town, and fired a barrage of gas bombs and concussion grenades at the Palestinians.

On Sunday evening, the soldiers invaded the al-‘Isawiya town, in Jerusalem, and closed many roads leading to protests.

The soldiers fired many gas bombs and concussion grenades, causing dozens of Palestinians to suffer the effects of tear gas inhalation.

The soldiers also invaded the al-‘Ezariya town, east of Jerusalem, and fired a barrage of gas bombs and concussion grenades at Palestinian protesters, causing many injuries.