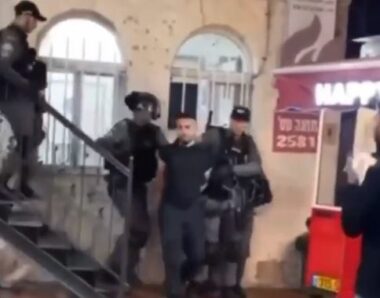 Israeli soldiers abducted, on Sunday night, three Palestinians from the occupied Palestinian capital, Jerusalem, and issued an order against another Palestinian preventing him from entering the Al-Aqsa Mosque for six months.

The soldiers invaded the Wadi al-Jouz neighborhood, before abducting Mohammad Eyad Sa’ida from his home.

The soldiers also invaded a gas station in Sheikh Jarrah, in Jerusalem, and abducted a young man, identified as Mansour Ibrahim Mansour.

In the Old City, the soldier assaulted and injured a young man, identified as Nidal Asfour, before abducting him.

In addition, the soldiers handed ‘Aahed Resheq, a member of the Regional Council of Fateh movement, an order denying him access to the Al-Aqsa Mosque and its surrounding areas for six months.

It is worth mentioning that Resheq previously received a similar order for one week, for what the army called “practicing Palestinian sovereignty in Al-Aqsa” in the first week of the holy Muslim month of Ramadan.

In related news, the soldiers assaulted many young Palestinian men in Bab al-‘Amoud, in Jerusalem, and confiscated Palestinian flags.

The soldiers also chased many young men in the area while attempting to abduct them.