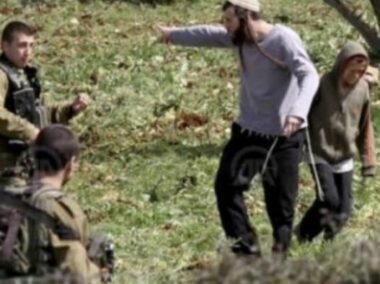 On Sunday, the head of security in the illegal Eliezer colony, which was built on stolen Palestinian lands in the al-Khader town, south of Bethlehem in the occupied West Bank, attacked and injured a young man.

Local activist Ahmad Salah said the armed colonist assaulted the young Palestinian man while he was plowing his family’s land in the Mantoura area in al-Khader.

He added that the colonist demanded the Palestinian, identified as Ahmad Mansour Salah, 28, to leave his land and stop plowing it, before striking him on the head with his rifle.

Salah said the young man fell unconscious before the locals called for help and rushed him to a Palestinian hospital in Bethlehem.

In related news, a group of Israeli colonists attacked many Palestinian cars, north of the northern West Bank city of Nablus, causing damage.