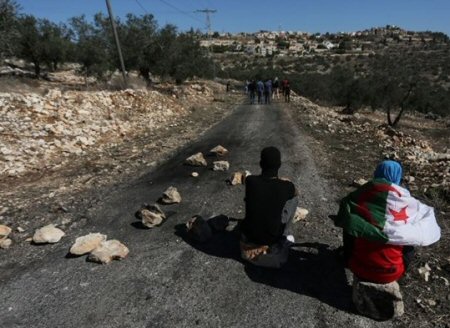 A number of Palestinians and international peace activists were injured by Israeli forces during the weekly anti-settlement march, on Friday afternoon, in the village of Kafr Qaddoum, in the northern occupied West Bank district of Qalqilia.

Although no protesters were shot, many protesters suffered from tear-gas inhalation and received immediate medical treatment on the scene.

Violent confrontations broke out between Israeli forces and Palestinian youth, due to the raid.

Ishteiwi added, according to Ma’an, that Israeli forces also raided a home in the village, belonging to Zahi Ali, and held him with his family inside the home, while soldiers used the rooftop to shoot at protesters and take photos of them.

Hundreds of protesters took part in the march that set off following Friday prayers, repeating slogans calling for unity and escalating protests against Israel.

Residents of Kafr Qaddoum began staging weekly protests in 2011 against Israeli land confiscations, as well as the closure of the village’s southern road by Israeli forces. The road, which has been closed for 14 years, is the main route to the nearby city of Nablus, the nearest economic center.