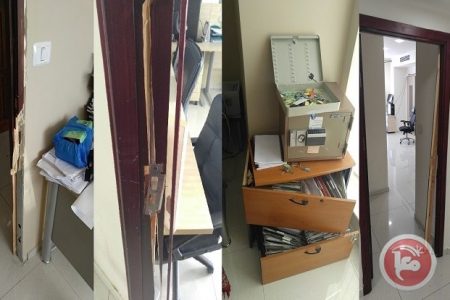 Israeli forces raided the headquarters of PalMedia production company, and searched several offices belonging to Arab and international news outlets in Ramallah city, in the central occupied West Bank, during dawn hours on Saturday, seizing equipment and documents from at least one of the offices, over accusations of alleged “incitement.”

A reporter from RT, which also has an office in the building, said that Israeli forces had destroyed some of the doors to the media outlets’ offices in order to get inside. However, no equipment was confiscated from RT’s office during the raid.

Witnesses said that 10 Israeli army vehicles had surrounded the building in Ramallah city before raiding and searching the offices.

An Israeli army spokesperson said that Israeli forces had “seized media equipment and documents used for incitement” from a media office in Ramallah — however, the spokesperson could not specify which office the items had been confiscated from.

She added that the raid was part of “ongoing efforts against incitement” in the West Bank. Although the spokesperson was unable to provide details on what equipment was seized, she noted that the documents confiscated included “inciting pictures.”
Palestinian news agency WAFA reported that hard disks were among the equipment seized by Israeli forces during the raid.

Clashes also broke out between Israeli forces and Palestinians following the raid, with Palestinians “showering” the Israeli army vehicles with rocks as they left the area.

Meanwhile, the Palestinian Ministry of Information released a statement condemning the raid, saying that the targeting of media “proves Israel’s intentions to prevent the guardians of truth from continuing their media, national, and ethical role of transferring the message of our people’s desired freedom.”

The ministry called upon the International Federation of Journalists to take immediate actions against the Israeli violations, and for the UN Security Council to apply Resolution 2222 to the Palestinian territory in order to provide protection to journalists.

Saturday’s raid was not the first time PalMedia has been raided by Israeli forces for alleged “incitement.” In 2014, Israeli forces raided the headquarters and shut down the “Good Morning Jerusalem” broadcast as it was being filmed live in a PalMedia studio.

Following the raid three years ago, Reporters Without Borders said that the raid had “joined the long list of violations of Palestinian news media rights by the Israeli security forces, with never-ending threats, arrests and military operations.”

The raid on Saturday directly followed two weeks of a mass civil disobedience campaign led by Palestinians, in occupied East Jerusalem, after the Israelis installed security equipment at the gates of Al-Aqsa Mosque, and subsequently banned Palestinians under the age of 50 from entering the holy site.

Israeli Prime Minister Benjamin Netanyahu used the occasion to point blame at the Qatar-based news network Al Jazeera for deliberately “inciting violence” at Al-Aqsa for its coverage of the events, and demanded that Israeli authorities shutter their offices in Israel.

Meanwhile, Israel has been accused of labeling any media that is critical of Israel and its policies in Palestinian communities as “incitement” in order to stifle criticisms of Israel’s discriminatory policies in Israel, its continued occupation of the West Bank for its 50th year, and its decade-long siege of the Gaza Strip that has collapsed the territory into an interminable humanitarian crisis.