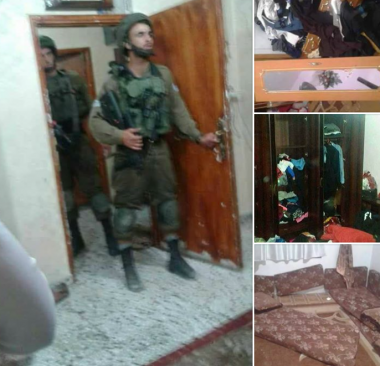 Israeli soldiers abducted, on Saturday at dawn, four Palestinians, including one with special needs, in the West Bank governorates of Hebron and Bethlehem.

The soldiers also installed roadblocks on roads leading to Yatta town, and the al-Fawwar refugee camp, south of Hebron, in addition to Sa’ir and Halhoul towns, north of Hebron, before stopping and searching dozens of cars, while inspecting the ID cards of the passengers and interrogating some of them.

Furthermore, several army jeeps invaded many neighborhoods in Hebron city, before the soldiers invaded and ransacked homes in the area.

In related news, the soldiers invaded Doha town, west of Bethlehem, and abducted a Palestinian with special needs, identified as Hamza Abdullah al-‘Afifi.

The soldiers also invaded a restaurant in the center of Bethlehem city, and abducted Ahmad Anwar Eghneimat, 21.

On Friday at night, the soldiers shot and injured two Palestinians with rubber-coated steel bullets, during clashes that took place near the Gate of the Tribes, in occupied East Jerusalem.

The clashes erupted after the soldiers assaulted many Palestinians, and prevented dozens from entering the Al-Aqsa Mosque.