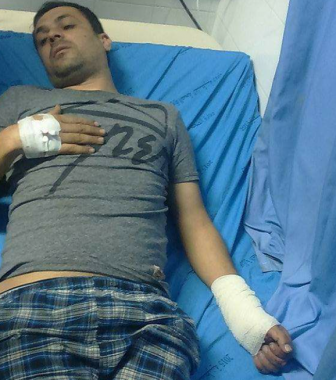 Israeli soldiers shot and injured, on Friday evening, a young Palestinian man, while in his own land with his children, in Deir Ballout town, west of Salfit, in the northeastern part of the occupied West Bank.

The soldiers shot Fa’ed Saleh Mousa, 33, with a live round in his left arm, after they fired many rounds at him, and members of his family, causing a moderate injury.

Sa’ed, the brother of Fa’ed, said that he, his brother, and with their children, went to their orchard, behind the Annexation Wall, west of Salfit, to water the trees.

>“We go their every Friday to water our olive trees, but approximately at 7:30 in the evening, a military jeep drove by, and stopped, before the soldiers stepped out of the vehicle, and started firing live rounds towards us at random,” Sa’ed stated.

“Our children were with us; we just hide behind some rocks, and that is when my brother was shot,” he added, “There were two other guys standing near us, both from Qalqilia, and wanted to cross into Israel for work.”

“I then called a member of Deir Ballout Local Council, and informed him of what’s happening,” Sa’ed stated, “He said that he would contact the District Coordination Office, maybe they can contact the Israeli side and see why they are shooting at us… the soldiers stayed there for some time; they didn’t even approach us, and later they just left.”